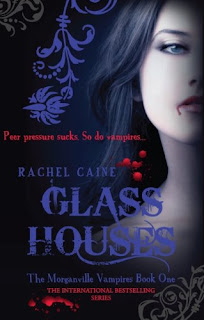 
It's a small college town filled with quirky characters. But when the sun goes down, the bad comes out. Because in Morganville, there is an evil that lurks in the darkest shadows - one that will spill out into the bright light of day.
Claire Danvers has had enough of her nightmarish dorm situation. The popular girls never let her forget just where she ranks on the school's social scene: somewhere less than zero. And Claire really doesn't have the right connections - to the undead who run the town.
When Claire heads off campus, the imposing old house where she finds a room may not be much better. Hew new roommates don't show many signs of life. But they'll have Claire's back when the town's deepest secrets come crawling out, hungry for fresh blood...

I was a little bit dubious before starting this book as I've not been too impressed with vampire based books recently. However, thankfully Glass Houses has proved to me that vamps are still awesome in a scary, evil kind of way, rather than in a sparkly, tormented soul kind of way! Yay!

jumps off to a good start, throwing the reader into some action and getting straight on with the plot instead of waffling about some back history. (Okay, so back story is important in most books but it's never the most exciting way to get into a book). Like the other main characters in the book, we meet Claire at a pretty vulnerable time which allows the reader to understand and identify with her straight away.

Claire is a likeable enough character. She's smart (like, really smart), attending University at a younger than usual age and she's a bit of a social outcast. If her parents had allowed her to go to a prestigious school then she'd have fitted in but in Morganville, she's just seen as weird. Claire is a tough cookie though, determined not to let anything beat her and that's what gets her through a lot of the situations she finds herself in.

The other main characters of the book, who become Claire friends, are also good. I expected at least one of them to turn out to be annoying but as yet in the series, it's all good. They all have their different personalities rather than just being duplicates of each other. Michael's the big brother, the protector, the one who watches out for the others; Shane's the hero type, action first and think later; Eve's probably the rational one as well as being the most outwardly rebellious.

Unsurprisingly in a young adult book when there's two guys and two girls, some kind of romance is going to happen but thankfully in Glass Houses this isn't the main point. It really bugs me when a story is based largely around which boy the female protagonist falls in love with. I saw the romance in this book more as character development than plot development and that fitted just right.

I did expect it to take longer for Claire to find out about the vampires in Morganville, although that didn't seem to be the important part of the plot, it was more about how she dealt with it. It was also much more realistic as the vamps were apparently not a big secret in the town. I found the vampires in this book refreshing for a current young adult book as it seemed to stick to more traditional lore than, for example, the Twilight and House of Night series'. The only bit I wasn't sure about was that some of the vampires seem to be able to be out in day - although not in direct sunlight. However, as this hasn't actually been explained yet, I'm willing to be open minded. I just hope they don't go into sparkly or magic ring territory!