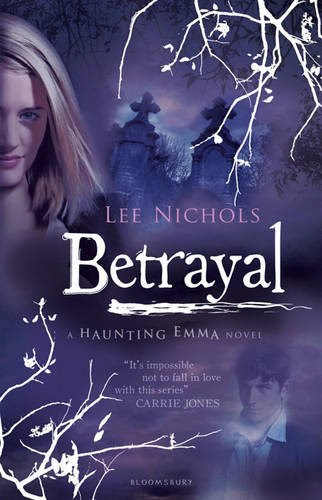 Emma Vaile is the most powerful ghostkeeper in centuries. Which is great for battling the wraith-master Neos and horrible for her social life. Emma knows fellow ghostkeeper Bennett Stern is her soul mate, but when ghostkeepers fall in love, the weaker one loses all power. And until Neos is defeated, Bennett and Emma can't risk it.

When the temptation of being with Emma gets to be too much, Bennett disappears, pursuing a dangerous path to increase his powers. Heartbroken and alone, Emma tries to lose herself in school. But when the Knell, a secret ghostkeeping society, sends two new ghostkeepers to Echo Point—one a snarky teen guy, the other a British scholar—Emma throws herself into training to battle Neos. But as the team grows stronger, so do the ghosts. And worse, one of their own will betray them. One Emma never suspected. . .

Emma is dealing with a whole lot of issues - some more normal than others. She's in love with a boy she can't be with; she doesn't know where her parents are; her friends blame her for Coby's death ... As well as all of this, she's one of the most powerful ghostkeepers there is and so it's down to her to stop Neos, the wraith-master.

This second book continues pretty much right off from where the first one finished. I liked that there was only a small amount of recapping and that the story got going straight away. The characters are developing nicely and I found myself liking Emma's fellow ghostkeeper, Natalie, more in this book. On the downside there was a lack of Bennett, although this was for plot reasons so it's not all bad - I just wanted to see more of him. There's a couple of new characters in the form of two ghostkeepers sent by the Knell to make up a team with Emma and Natalie. Simon's the older, sensible one. The voice of reason although he's actually the weakest of the ghostkeepers in terms of power. Lukas is more the act now think never type and adds another dimension to the group.

Betrayal adds nicely to the overall plot of the series, moving it along at a good pace with plenty of action. It's also gets the right balance of having a good finish but still leaving you wanting to read more. I'm greatly looking forward to the third book.
Posted by Tasha at 20:34