Glory is from a family of witches and lives beyond the law. She is desperate to develop her powers and become a witch herself. Lucas is the son of the Chief Prosecutor for the Inquisition — the witches’ mortal enemy — and his privileged life is very different to the forbidden world that he lives alongside.

And then on the same day, it hits them both. Glory and Lucas develop the Fae — the mark of the witch. In one fell stroke, their lives are inextricably bound together, whether they like it or not . . .


Gloriana Starling Wilde, grand-daughter of one of the famous Starling Twins, has the Fae in her blood and in her heart. Growing up in the East End of London at the centre of the Cooper Street Coven, Glory just can't wait for her powers to develop.

Lucas Stearne, son of the Chief Prosecutor for the Inquisitorial Court, couldn't be any more different to Glory if he tried - with his private school education and well-to-do family, Lucas' future lies in the Inquisition, following in the footsteps of his ancestors.

Lucas and Glory's lives become entwined when, on the same day, both get the Fae and turn Witchkind. Glory is delighted; Lucas is filled with dread.

Burn Mark is set in a modern day London, in a world where witches are very much real and while common knowledge, generally untrusted by many. There are some good witches of course but the witch covens are heavily linked to criminal gangs, using their fae for illegal activity. While steep in history and proud of their traditions, The Inquisition are now less about witch burning and more about registering and policing those with the Fae.

This book is an excellent combination of both modern and ancient worlds and I loved the story world that the author created. It's highly detailed, throwing in witch politics and undercover investigations along with more personal mysteries such as what happened to Glory's mum and exactly what is Charlie Morgan up to.

The characters are great to and Glory especially as she is so unlike the type of girl usually found in YA books. She's first described at "the one with big hooped earrings and bare legs mottled with cold" and Lucas' friend calls her a chavvy little hag. Glory wants her Fae to develop and she doesn't want to use it to make herself pretty or get the boy of her dreams. Heck, she doesn't even want to use it for something heroic like defeating evil. Her plans are more of the criminal variety and one of the ways we see the coven using witchwork is to pull of a jewellery heist.

Lucas comes across as a bit of an annoying posh idiot at the start of the book, kind of pretentious and up himself but as he starts to embrace who he is becoming he gets less obnoxious. While not the most likeable of characters to start with, he's a great one all the same and the further into the book I got the more I warmed to him

One of the best parts about the two main characters were that they genuinely hate each other when they first meet and not in a way that screams of potential love interest. It was a refreshing change that the book wasn't filled with a building romance between them.

The third character I have to mention is Troy Morgan - as I did have a little bit of a soft spot for him. Troy is the son of the boss of the Wednesday Coven and Glory's second cousin (I think anyway). He's a bad boy and plays a large hand in a lot of the criminal activity that goes on. There's a bit of a love-hate thing going on between Glory and Troy, essentially because they're kind of expected to end up together, in a "Let's join the covens" type way. While neither particularly likes the idea, they can see the benefits so it makes for a fun to read relationship, filled with bickering and banter.

My only one slight criticism of the book was that there was a lot in it in terms of world building. It's very details and at times it did slow down the plot a little, although without it the story would have been lacking so it's almost a catch-22 situation. Essentially I did like that the author clearly knows this world inside out and it was definitely interesting to read about, there were just a few moments when I wanted to get back to what the characters were doing. It did feel very much like a first book in a series though, so hopefully the author will be writing more - because frankly it would be a waste to have developed such an intriguing world to not use it again.
Posted by Tasha at 15:52

Stacking the Shelves is a new meme hosted at Tynga Reviews. It's all about sharing the books you are adding to your shelves, may it be physical or virtual. 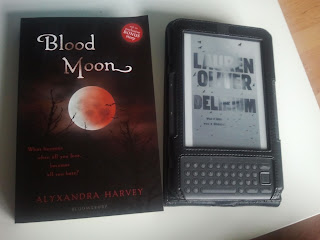 Blood Moon - Alyxandra Harvey
So excited to get my hands on the next installment of the Drake Chronicles. I love this series!

Delirium - Lauren Oliver
I already read this when it first came out but didn't own a copy as I got it from the library. When I saw it was on offer on Amazon, I couldn't resist ... I just need to read book 2 of the series now, which I havne't gotten round to yet.

Mud, Sweat and Tears - Bear Grylls
Again, another Amazon bargain. I love watching Born Survivor on TV so I snatched this up.