Liam O'Connor should have died at sea in 1912.
Maddy Carter should have died on a plane in 2010.
Sal Vikram should have died in a fire in 2026.
But all three have been given a second chance - to work for an agency that no one knows exists.
Its purpose: to prevent time travel destroying history . . .

A time wave has struck that alters the entire history of the American Civil War. Abraham Lincoln has followed Liam into the present from 1831 - and now the world is in a dangerous state of limbo . . .
If the TimeRiders can't return Lincoln to the past, the Civil War will never end. Can Maddy persuade two colonels on either side of no man's land to cease fire long enough to save the future?

A minor time wave has Liam travelling back to 1831 to investigate and set right an accidental death of a young man named Abraham Lincoln. Lincoln wasn't supposed to die, his destiny was to become President of the United States but someone's been messing with time ... again. After ensuring that Lincoln remains alive, Liam returns to 2001 but somehow manages to bring Lincoln with him. With Lincoln now not being able to have influence on the American Civil war everything changes. The war never ends and instead becomes a battle between the French and British on US ground.

This fourth book takes the Timeriders series in a slightly different direction from the other books in the series. The previous instalments have had a majority of the action happening in the past. This time they are in the present, even though it's a very altered present. There's a very steam-punky feel to the story with the ongoing war drastically changing how science and technology developed. Computers and cell phones are unheard of but genetic engineering is much more advanced.

I really enjoyed reading this book and I was glad the author mixed up it up a bit in terms of the story pattern set in the earlier books. The characters are developing nicely and we're starting to get to know a lot more about the Timeriders agency and how the time travel technology came about. As an extra advantage, I found that I actually learned quite a lot about the American Civil War from reading this book, as I had an extremely limited knowledge of it before hand.

I highly recommend the Timeriders series, particularly to fans of Dr Who and Scott Westerfeld's Leviathan series.
Posted by Tasha at 15:42

Feast of Fools (The Morganville Vampires)

The Left Hand of God

- Paul Hoffman
The Hitchhiker's Guide to the Galaxy

Teaser Tuesday is a weekly bookish meme, hosted by MizB of Should be Reading Anyone can play along! Just do the following:

They walked slowly round the duck pond, Kicking the first dry leaves of the autumn aside. They watched a young couple rollerblading ahead of them. Maddy smiled sadly, envious of the pair of them, both about her age and seemingly without a solitary care in the world.

With the cold weather we had here over the weekend, I got a good amount of reading done ... because there's not much better than curling up with a good book and a mug of hot coffee when it's snowing outside.

- Alex Scarrow
The Catastrophic History of You and Me

I've got The Left Hand of God to pick up from the library (hopefully tomorrow if I feel like venturing out in the snow). I want to read that so I can make a start on the second book. Also I figured it was about time I had a look at the Dark-Hunter series so I'll hopefully be getting to that soon.

The Left Hand of God

The Catastrophic History of You and Me - Jess Rothenberg

OMG! So excited to get this one as I love the Timeriders series! Also, one book in the post means a chance to make a dent on the tbr pile. 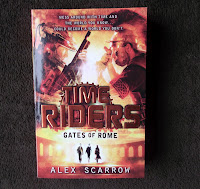 These were all freebies on Amazon UK earlier in the week so how could I resist?