Stacking the Shelves is a new meme hosted at Tynga Reviews. It's all about sharing the books you are adding to your shelves, may it be physical or virtual. 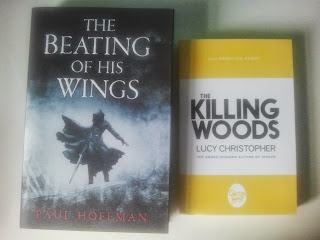 Email ThisBlogThis!Share to TwitterShare to FacebookShare to Pinterest
Labels: meme, stacking the shelves

Teaser Tuesday is a weekly bookish meme, hosted by MizB of Should be Reading Anyone can play along! Just do the following:

* Grab your current read
* Open to a random page
* Share two (2) “teaser” sentences from somewhere on that page
* BE CAREFUL NOT TO INCLUDE SPOILERS! Make sure that what you share doesn't give too much away! You don’t want to ruin the book for others.
* Share the title and author, too, so that other TT participants can add the book to their TBR Lists if they like your teasers!


Of all the unpleasant memories the two of them shared, this was the worst. Convinced that Cale's murderous gifts were divinely inspired it had barely occurred to Bosco that being obliged to fight half a dozen experienced, if disgraced, soldiers to the death might have been deeply traumatic for a boy of twelve or thirteen, however skilled or callous.

Six years after a pandemic devastates the human population, and the subsequent loss of much of the world's technology, Chris Price finally makes it from New York to Britain to reunite with his brother. But unresolved grief over his dead wife and baby and the horrors he witnessed as he traveled through a changed world have damaged him. He struggles to let go of his past, accept the healing kindness of those around him, and let love back into his life.


Set in the present day rather than the future, Breakdown takes a slightly more unusual look at the world following a global pandemic. The book focuses more on the people and their emotions than some books of the genre which again makes it a little different from the crowd a little. Unfortunately, while I really liked the premise of this book, I was let down by the execution.

The writing wasn't terrible but it was kind of dull and this didn't exactly compel me to pick the book up and read. The start of the story was really slow with a lot of explaining and back story. While this is kind of essential to this type of book, it wasn't done in the most exciting of ways, mainly different characters telling each other what had happened. And as I didn't actually care about the characters, I didn't much care what they were saying. To be honest, I was very confused at who was who. There was like, three characters that we knew a bit about but everyone else was a bit random at this point of the book. The mention of "Alan and his wife, Vivien" a number of times over a few pages was almost laughable; I don't know why I kept having to be told that she was his wife - especially as I had no clue who Alan was anyway (other than Vivien's husband anyway).

I also had trouble with the fact this book is by an American author but set in the UK. I was willing to look past the Americanisms - because well, us Brits watch American TV and pick them up - it was the overuse of Britishisms that bugged me. The word 'queue' was used about 5 times in a few pages (sometimes awkwardly if not incorrectly) and I have literally never heard a British person say "awfully" as in "that's awfully good" (except in Famous Five books anyway). Obviously I'm not saying that it doesn't happen but it's a bit more Downton Abbey than post-apocalypse. To me it felt like the author was trying to hard. To be fair, non-UK readers probably wouldn't notice so much but I was bored with the 'plot' by now so was trying to keep myself amused.
Posted by Tasha at 15:11

Email ThisBlogThis!Share to TwitterShare to FacebookShare to Pinterest
Labels: review


Stacking the Shelves is hosted at Tynga Reviews. It's all about sharing the books you are adding to your shelves, may it be physical or virtual. 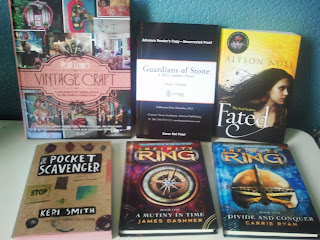