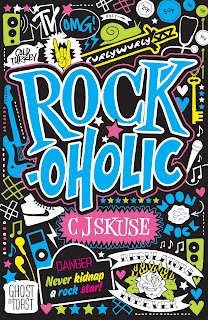 The winner of a signed copy of Rockoholic by CJ Skise is:

Email me your address to receive your prize :D
Posted by Tasha at 20:29

I have a bunch of teasers this week because I just couldn't decide on which book that I'm reading to choose from!

He wrote quickly. Moments like this were rare; they were always accompanied by the same feeling: a certain lightness in the head, a shallowness of breath, a quickening of the blood. It was like falling in love.

crack, if I could describe how her blood pooled on the rock, how it matted the grass and dried in her yellow hair. But I have learned that life is both less exciting and more horrid than stories.

Tessa stifled a scream. His face was as white and waxy as it had been the first time she's seen him, at the dock in Southampton; his bulging eyes still reminded her of Miranda's, and his teeth gleamed like metal when he grinned.

- Jackie Kessler Morse
Percy Jackson and the Battle of the Labyrinth

Email ThisBlogThis!Share to TwitterShare to FacebookShare to Pinterest
Labels: it's monday what are you reading, meme, weekly round up 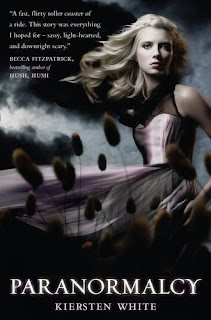 Weird as it is working for the International Paranormal Containment Agency, Evie's always thought of herself as normal. Sure, her best friend is a mermaid, her ex-boyfriend is a faerie, she’s falling for a shape-shifter, and she’s the only person who can see through paranormals' glamours, but still. Normal.

Only now paranormals are dying, and Evie's dreams are filled with haunting voices and mysterious prophecies. She soon realizes that there may be a link between her abilities and the sudden rash of deaths. Not only that, but she may very well be at the center of a dark faerie prophecy promising destruction to all paranormal creatures.

Since she was a young child, Evie has lived in The Center, base of the IPCA, who she has also worked for, using her ability to see through paranormal glamours. Evie's life is okay, if a little boring sometimes - there's no one else her age at the The Center and her only real friend is mermaid, Allisha. Then an unknown paranormal shows up, a shape-shifter of sorts - no one really knows what he is. Evie starts to get to know him, Lend, and discovers that maybe the IPCA isn't what she thought it was. Throw in an evil girl who looks somewhat like Evie and you have an exciting plot on your hands.

When I first started reading Paranormalcy I was expecting something quite different to what I got. I thought it was going to be dark and mostly serious. I was expecting a traumatised, sorrowful protagonist. What I got was funny, witty dialogue with a kick-ass heroine who loves wearing pink and names her weapons things like Tasey. I don't know where I got the original impression from but I'm certainly glad to have got the opposite.

Evie was a great character to get to know. All she wanted was to be a normal teenager, to go to high school, have her own locker and learn to drive. However she'd as good as accepted that this wasn't going to be so she was making the most of what she did have. Evie had a good balance of not being too peppy or too whiney and although in some ways she seemed a little innocent for her age, that felt right for a character who'd grown up without the influence of other kids/teens.

A fun read which in some places was reminiscent of Buffy the Vampire Slayer, I'm looking forward to the sequel, Supernaturally, when it comes out later this year. 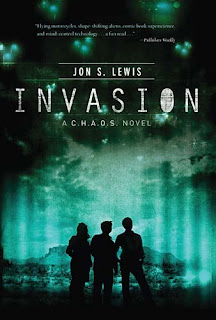 He didn't ask for the job, but now all that stands between us and chaos... is Colt

Colt McAlister was having the summer of his life. He spent his days surfing and his nights playing guitar on the beach with friends. He even met a girl and got his first car. But everything changes when his parents are killed in a freak accident.

He's forced to leave his old life behind and move to Arizona with his grandfather. The only person he knows at the new high school is a childhood friend named Dani. And Oz, a guy he's sure he's never met but who is strangely familiar.

But what if his parents' death wasn't an accident? His mother, an investigative reporter, was going to expose a secret mind-control program run by one of the world's largest companies. Before she could release the story, what if agents from Trident Biotech made sure she couldn't go public?

Vowing to uncover the truth, Colt gets drawn into a secret world of aliens, shapeshifters, flying motorcycles, and invisible gateways.

The Invasion has begun.

A car crash killing both his parents has Colt moving to Arizona to live with his grandfather. Colt soon comes to suspect that his parents death isn't necessarily the accident it was deemed to be. His new friend, Oz, seems strangely familiar and his grandfather's past isn't quite what it seemed either.

Colt becomes aware of an agency called CHAOS, which works to protect Earth from alien invasion. Colt finds a lot of the details of CHAOS closely match a comic book series he used to read as a child and the main character, the Phantom Flyer, isn't unlike someone Colt knows.

Invasion is the first book of the series and as such a good part of it is spent setting up the story world and introducing the characters. There's still a bunch of action to keep the pace moving along nicely but the overall plot of this book isn't overly complex; in this case it's a good thing otherwise there'd have probably been too much to take in. The characters seemed well developed, even though we don't get to know all their back history just yet, I got the impression that it was there in the authors mind. The main trio - Colt, Oz and Colt's former childhood friend, Dani - are well balanced, with Dani being the techy one, Oz being the knowledgeable on and Colt being the leader/action guy.

This book reminded me of a cross between books such as the Alex Rider (Stormbreaker) series, with it's action and gadgets, combined with the Men in Black movies as the CHAOS agency seemed to be taking on a similar role. It was interesting to have different alien creatures in the story and it's the kind of story where the possibilities are endless. I'm looking forward to finding out what happens to Colt and his friends next. 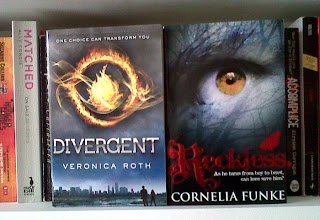 
In Beatrice Prior's dystopian Chicago, society is divided into five factions, each dedicated to the cultivation of a particular virtue—Candor (the honest), Abnegation (the selfless), Dauntless (the brave), Amity (the peaceful), and Erudite (the intelligent). On an appointed day of every year, all sixteen-year-olds must select the faction to which they will devote the rest of their lives. For Beatrice, the decision is between staying with her family and being who she really is—she can't have both. So she makes a choice that surprises everyone, including herself.


For years, Jacob Reckless has been secretly disappearing to another world, a world behind a mirror, a world for which his father abandoned his family. The mirror world is Jacob's escape from reality. It's a place for treasure hunts and magnificent quests. A world where witches haunt the forests and giants and dwarfs roam. A world locked in a deadly war.

Jacob's secret seems safe, until one day his younger brother Will follows him, with disastrous consequence. Faced with a curse that is quickly turning Will to stone, the Reckless brothers are thrust into a race against time to find a cure before Will is lost forever.

Inspired by the Brothers Grimm, master storyteller Cornelia Funke introduces a lush, enchanting world where fantasy meets reality. Reckless is a thrilling adventure, a tale of heroism and loyalty, filled with danger, mystery, and magic--with fairy tales and legends re-imagined as never before.


What great books did you hear about/discover this past week? Share your FRIDAY FINDS! Friday Finds is hosted by MizB at Should be Reading

This is the explosively page-turning new novel for teenagers from the author of the award-winning "Noughts and Crosses" sequence. You're about to receive your A-level results and then a future of university and journalism awaits. But the day they're due to arrive your old girlfriend Melanie turns up unexpectedly ...with a baby ...You assume Melanie's helping a friend, until she nips out to buy some essentials, leaving you literally holding the baby ...Malorie's dramatic new novel will keep you on the edge of your seat right to the final page.

Teenager Alice Bonham's life feels crazy after she meets Jack. With his fondness for pink Chuck

Taylors and New Wave, he's unlike anyone she knows. Then she meets his brother, Peter. Even though he can't stand the sight of her, she's drawn to him. Falling for two guys isn't even the worst of her problems. Jack and Peter are vampires, and Alice finds herself caught between love and her own blood.

When danger, passion and chance collide...Jack worships luck and decides his actions by the flip of a coin. No risk is too great if the coin demands it. Luck brings him Jess, a beautiful singer who will change his life. But Jack's luck is running out, and soon the stakes are high. As chance and choice unravel, the risks of Jack's Game become terrifyingly clear. An evening of heady recklessness, and suddenly a life hangs in the balance, decided by the toss of a coin. In the end, it is the reader who must choose whether to spin that coin and determine: life or death.