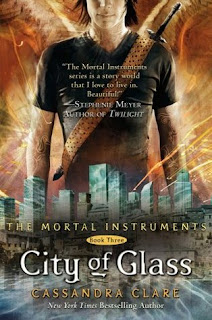 To save her mother's life, Clary must travel to the City of Glass, the ancestral home of the Shadowhunters -- never mind that entering the city without permission is against the Law, and breaking the Law could mean death. To make things worse, she learns that Jace does not want her there, and Simon has been thrown in prison by the Shadowhunters, who are deeply suspicious of a vampire who can withstand sunlight.

As Clary uncovers more about her family's past, she finds an ally in mysterious Shadow-hunter Sebastian. With Valentine mustering the full force of his power to destroy all Shadow-hunters forever, their only chance to defeat him is to fight alongside their eternal enemies. But can Downworlders and Shadowhunters put aside their hatred to work together? While Jace realizes exactly how much he's willing to risk for Clary, can she harness her new found powers to help save the Glass City -- whatever the cost?

Love is a mortal sin and the secrets of the past prove deadly as Clary and Jace face down Valentine in the final installment of the New York Timesbestselling trilogy The Mortal Instruments.

City of Glass is the third book of the Mortal Instruments series, following Clary and the Shadowhunters on their quest to stop Valentine taking over the Clave. Most of the action takes place in Alicante, home of the Nephilim. The city’s defences have been breeched and Valentine gives the Clave an ultimatum, which is essentially to join him or he will attack the city with his army of demons.

There’s plenty of action and drama included in this instalment of the story and I was glad that while I’d worked out one of the ‘twists’ quite early on in there series, there was more to it than I’d thought so I got both the satisfaction of being right and being surprised at the same time! Best of both worlds.

As ever the characters are great and continue developing throughout. Jace is still my favourite of all of them and while he’s still very witty and sarcastic – we also learn a lot more about his less secure side. The rest of the characters continue to develop nicely and I have to admit that as an evil baddie, I like the character of Valentine. Okay, I don't like him but he's a pretty awesome bad guy. Quite often in books the baddie isn't very well developed beyond well, being bad. In this series, however, there's actual depth to the evil one.

I think it’s safe to say that if you enjoyed the first and second books, then you won’t be disappointed in this one as it ties everything up nicely and yet leaves you wanting more at the same time. I’m glad that this isn’t the last of the Mortal Instruments book, with a fourth coming out next year. I’m also really looking forward to reading Clockwork Angel