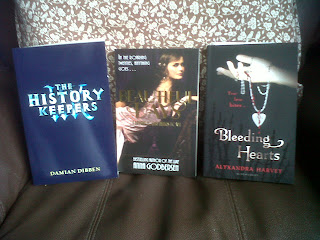 The next installment of The Drake Chronicles. I can't wait to read this one!

Lucy's cousin Christabel has come to live in Violet Hill, and adjusting to the difference between life in a small mountain town and her home in the city is difficult enough. The strict curfew that Lucy's parents enforce is the worst part. Something really dangerous couldn't possibly happen in this tiny town.
But Christabel has noticed some mysterious happenings, and it seems like Lucy, her boyfriend Nicholas and his brother Connor are all in on a secret that Christabel doesn't understand—one that seems deadly serious. Although she won't admit it, Christabel would love to be in on any secret with Connor Drake. But when she is kidnapped by the ruthless Hel-Blar vampires, Christabel must cause more and more trouble in Violet Hill, Lucy and Connor finally fill Christabel in on all the undead drama. Together, they must find a way to stamp out the Hel-Blar for good.

I loved the first book of the Bright Young Things series and so I'm really looking forward to this one.

After a month in New York, Cordelia Grey and Letty Larkspur are small-town girls no longer. They spend their afternoons with Astrid Donal at the Greys’ lush Long Island estate and their nights in Manhattan’s bustling metropolis. But Letty’s not content to be a mere socialite. She is ready at last to chase her Broadway dreams—no matter the cost.

Cordelia is still reeling from the death of her father at the hands of Thom Hale, the man she thought she loved. Now she is set to honor Darius Grey’s legacy . . . and take her revenge.

Promised to Cordelia’s half brother, Astrid is caught up in a world of dazzling jewels and glittering nights—and the sparkle is blinding. Charlie Grey is a gangster playing a dangerous game; and for Astrid, Cordelia, and Letty, the stakes could be deadly.

This sounds very Dr Who and similar to the TimeRiders series so should be good.

Imagine if you lost your parents - not just in place, but in time. Jake Djones' mum and dad have gone missing and they could be anywhere in the world - at any time in history. Because the Djones family have an astonishing secret, which for years they've managed to keep - even from each other. They belong to the History Keepers: a secret society which travels through the centuries to prevent evil enemies from meddling with History itself. In the quest to find his parents, Jake is whisked from 21st Century London to 19th century France, the headquarters of the mysterious History Keepers, where he discovers the truth about his family's disappearance - and the dastardly Prince Zeldt's plan to destroy the world as we know it...