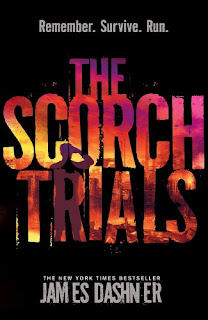 The Maze was only the beginning...

Solving the Maze was supposed to be the end. No more puzzles. No more Variables. And no more running. Thomas was sure that escape meant he and the Gladers would get their lives back. But no one really knew what sort of life they were going back to.

In the Maze, life was easy. They had food, and shelter, and safety... until Teresa triggered the end. In the world outside the Maze, however, the end was triggered long ago.

Burned by sun flares and baked by a new, brutal climate, much of the earth is a wasteland. Government has disintegrated--and with it, order--and now Cranks, people covered in festering wounds and driven to murderous insanity by the infectious disease known as the Flare, roam the crumbling cities hunting for their next victim... and meal.

The Gladers are far from done running. Instead of freedom, they find themselves faced with another trial. They must cross the Scorch, the most burned-out section of the world, and arrive at a safe haven in two weeks. And WICKED has made sure to adjust the variables and stack the odds against them.

Thomas can only wonder--does he hold the secret of freedom somewhere in his mind? Or will he forever be at the mercy of WICKED?

The Gladers have escaped The Maze and they've been rescued from the clutches of the people responsible for putting them there ... or have they? Thomas and his friends find themselves in a situation that has them almost wishing they were back in the Glade where life was relatively easy. Given the task of crossing the Scorch, another test, the Gladers are faced with much tougher conditions, battling against the extreme heat and the Cranks.

The Scorch Trials carries on from the action packed first installment of The Maze Runner series. Similarly, it's plot based rather than character based, although we do get to know some of the more main characters a little better in this book. At times the plot itself is confusing but again, like the previous book, this adds to the whole experience. The characters are confused and have no idea what's going on or what to expect next and that comes across in the story extremely well.

An excellent follow up to The Maze Runner which leaves you needing to read the upcoming third book to find out what exactly is going on.
Posted by Tasha at 21:47