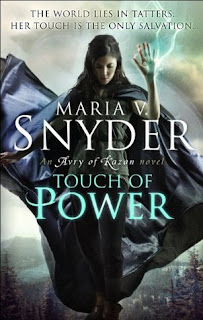 Laying hands upon the injured and dying, Avry of Kazan assumes their wounds and diseases into herself. But rather than being honored for her skills, she is hunted. Healers like Avry are accused of spreading the plague that has decimated the Territories, leaving the survivors in a state of chaos.

Stressed and tired from hiding, Avry is abducted by a band of rogues who, shockingly, value her gift above the golden bounty offered for her capture. Their leader, an enigmatic captor-protector with powers of his own, is unequivocal in his demands: Avry must heal a plague-stricken prince—leader of a campaign against her people. As they traverse the daunting Nine Mountains, beset by mercenaries and magical dangers, Avry must decide who is worth healing and what is worth dying for. Because the price of peace may well be her life...

Touch of Power is a brilliant fantasy adventure story which draws you into an amazing world of magic. Avry lives in a time of plague which has killed off a large amount of the population. As a healer, she should be an essential part of the community but instead, as people believe Healers are the cause of the disease, Avry is having to live in hiding, moving from town to town so she doesn't get found out.

Arrested after healing a small child, Avry lands herself in a cell and is swiftly rescued (or abducted, depending on how it's viewed!) by a group who want her to heal Prince Ryne. The group's leader, Kerrick, is a stern, serious type who Avry pretty much hates, although his character screams out 'love interest' so it's fun to see how that pans out as they bicker and argue their way through most of the story.

I liked all of the characters in the story. Snyder always seems to get a good mix of realism and awesomeness in her characters. Avry is a young woman who's had to survive on her own instinct for a while so there's some level of vulnerability yet toughness in her. The other thing I liked about this book was the age of the chacters. Avry is around twenty with some of the others a bit older. To me this was more truely 'young adult' than 'teen' than most YA books and it added a bit more to the story as the characters were that bit more mature in their feelings and emotions.

The book reminded me a lot of Graceling by Kristin Cashore, which I also loved. It's part medievil type fantasy but there's a more modern twist on it with scientific developments and such. If you enjoy quest tales full of magic, swords, princes and romping across realms then this is the book for you.
Posted by Tasha at 21:51