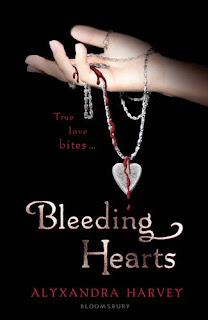 Lucy's cousin Christabel has come to live in Violet Hill, and adjusting to the difference between life in a small mountain town and her home in the city is difficult enough. The strict curfew that Lucy's parents enforce is the worst part. Something really dangerous couldn't possibly happen in this tiny town. But Christabel has noticed some mysterious happenings, and it seems like Lucy, her boyfriend Nicholas and his brother Connor are all in on a secret that Christabel doesn't understand - one that seems deadly serious. Although she won't admit it, Christabel would love to be in on any secret with Connor Drake. But after Christabel is kidnapped by the ruthless Hel-Blar vampires, Lucy and Connor finally fill her in on all the undead drama. Together, they must find a way to stamp out the Hel-Blar for good.

With her mother in rehab, Christabel comes to stay in Violet hill with her cousin Lucy. Coming from the city, Christa is surprised by the rules and restrictions set down by her aunt and uncle regarding curfew and being out after dark. Obviously unaware of the vampire problem, she wonders what can be so dangerous. She soon finds out, getting kidnapped by Hel-blar makes her realise she's not in just some sleepy little town. Fortunately, where there's Hel-blar, there's Drakes and the brother in question this time is Connor. Just like his twin, he's hot but Connor is more the geeky computer nerd than the player Quinn is (or was before he hooked up with Hunter in the previous book).

I'm a big fan of this series and this fourth installment doesn't disappoint. Initially I wasn't sure about the new character (Christabel) mainly because I think I was expecting her to be something else. I don't know why but I was waiting for her to be bitchy or something. I quickly grew to like her though and her developing relationship with Connor is great to read.

I loved that we're starting to find out more and more about the vampire lore of this world, in particular the history of the different groups of vampires. The characters are developing well as the series continues and although Solange was a bit irritating at times, this was completely fitting with what's going on with her. My only down point is that I'd like more of Kieran but that's just because he's my favourite of the boys so far.

A great continuation of a brilliant series. I can't wait for the next one!
Posted by Tasha at 21:21