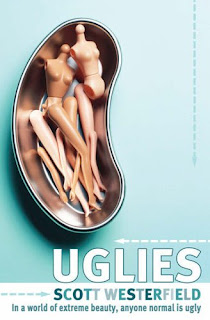 Playing on every teen’s passionate desire to look as good as everybody else, Scott Westerfeld (Midnighters) projects a future world in which a compulsory operation at sixteen wipes out physical differences and makes everyone pretty by conforming to an ideal standard of beauty. The "New Pretties" are then free to play and party, while the younger "Uglies" look on enviously and spend the time before their own transformations in plotting mischievous tricks against their elders. Tally Youngblood is one of the most daring of the Uglies, and her imaginative tricks have gotten her in trouble with the menacing department of Special Circumstances. She has yearned to be pretty, but since her best friend Shay ran away to the rumored rebel settlement of recalcitrant Uglies called The Smoke, Tally has been troubled. The authorities give her an impossible choice: either she follows Shay’s cryptic directions to The Smoke with the purpose of betraying the rebels, or she will never be allowed to become pretty. Hoping to rescue Shay, Tally sets off on the dangerous journey as a spy. But after finally reaching The Smoke she has a change of heart when her new lover David reveals to her the sinister secret behind becoming pretty. The fast-moving story is enlivened by many action sequences in the style of videogames, using intriguing inventions like hoverboards that use the rider’s skateboard skills to skim through the air, and bungee jackets that make wild downward plunges survivable -- and fun. Behind all the commotion is the disturbing vision of our own society -- the Rusties -- visible only in rusting ruins after a virus destroyed all petroleum. Teens will be entranced, and the cliffhanger ending will leave them gasping for the sequel.

Uglies is exciting adventure sci-fi at it's best! It's futuristic, post-humans-almost-destroy-the-world and pretty awesome. In places it reminded me of Orwell's 1984, Alex Garland's The Beach and the video game Fallout 3. I love all three and combined with a good handful of teen drama, this book was brilliant.

Tally Youngblood lives in Uglyville. All of her friends have already turned sixteen and had the operation to make them pretty, meaning they are living the party lifestyle in New Pretty Town. Tally has been left behind so when she meets Shay, who shares her birthday, the two of them set about having some fun until they're sixteen as well.

When Shay decides she wants to escape and find the Smoke - a camp where people stay ugly but free - Tally doesn't know what to do, all she's ever wanted is to be pretty.

Although it is a Young Adult book it didn't read like teen fiction - in a good way! The plot gave just enough away to make me want to keep reading, without being too obvious. The characters well written and believable - and I actually cared what happened to them, almost right from the start. Descriptions were enough to get the imagination going without giving every bit of detail away. If I were to write a book, I'd want it to be like this one!

Reviews of the rest of the series: