Review: No and Me - Delphine de Vigan 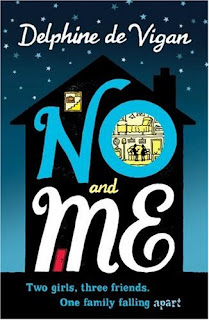 Parisian teenager Lou has an IQ of 160, OCD tendencies, and a mother who has suffered from depression for years. But Lou is about to change her life—and that of her parents—all because of a school project about homeless teens. While doing research, Lou meets No, a teenage girl living on the streets. As their friendship grows, Lou bravely asks her parents if No can live with them, and is astonished when they agree. No’s presence forces Lou’s family to come to terms with a secret tragedy. But can this shaky, newfound family continue to live together when No’s own past comes back to haunt her?

On the surface No and Me seems like a run of the mill Young Adult novel of a teenage girl dealing with both a family tragedy and growing up. Dig a little deeper though and this book is so much more than that, largely because of two factors. The first being the simple yet emotion filled writing style. The story is told not just from a first person point of view but it really did read as if an intelligent teen was retelling it - including those unique rambley off-topic moments, which all just added to the character and effect of the book. In some ways it reminded me of Catcher in the Rye

The second aspect of this book which made it unlike so many others was Lou herself. Her character was very much like the protagonist in The Curious Incident of the Dog in the Night Time

(Mark Haddon) in that she used intellectual means, such as mathematical problems, for coping with the emotions of every day life. I really liked how Lou was extremely intelligent but at the same time had issues functioning with normal life. At one point she states that she has an IQ of 160 but can't tie her own shoe laces. She doesn't socialise well and dreads the presentation she has to do in front of the class. She collects food labels to compare the ingredients and conducts various experiments at home just to satisfy her curiosity.

Through Lou we also get to know No, the homeless girl who eventually comes to live with the family, and Lucas, a boy in Lou's class. No clearly has her own issues to deal with - living on the streets and then adapting to family life - as does Lucas. Lou and Lucas are complete opposites in their class at school. Lou is two years ahead and Lucas is two years behind. Lucas is the only one who really pays attention to Lou and it makes a unique friendship. There is also the interesting contrast between the naive Lou and the tough, streetwise No. All three are great characters in their own way.

Personally, I really enjoyed No and Me but I can see that it is probably one of those love it or hate it kind of books. I'd definitely recommend it if you liked the above mentioned books or if you're looking for something a little bit different.
Posted by Tasha at 18:42