After a tsunami causes massive devastation to a tropical island, its governor sends in the bulldozers to knock down villages, replacing them with luxury hotels. Guarding the corrupt governor's family isn't James Adams' idea of the perfect mission, especially as it's going to be his last as a CHERUB agent. And then retired colleague Kyle Blueman comes up with an unofficial and highly dangerous plan of his own. James must choose between loyalty to CHERUB, and loyalty to his oldest friend. 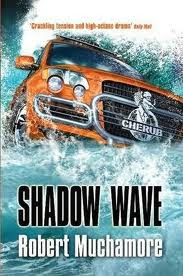 This is the twelfth and final book in the series. You can read a summary of what CHERUB is all about here. Hopefully one day I'll get round to rereading and reviewing the previous books.
James is seventeen now and it's only a matter of time before he retires as a CHERUB agent. This book takes on a slightly different format to the previous ones which mostly start out with a training exercise and then go onto the main mission. Shadow wave can generally be split into three parts. The first third starts off with James finishing up his previous mission with the Brigands Motorcycle Club before returning to the CHERUB campus. A lot of previous characters return for a reunion of sorts and James finds out from his best friend, Kyle, that the last mission he is set to go on isn't quite what it seems. This lead to a fairly long flashback section in the middle of the book - of a previous mission of Kyle's - that sets up the rest of the book.
The main thing I noticed about this book was that a lot of it wasn't centred around James. There's so many great characters in these books so it was good to see sections from the point of view of some of the other characters. There were some I'd have liked to have seen more of but I guess there's only so much you can put in one book! I'd have really liked to have found out more about the epically long mission that Dante was on. It keeps being mentioned throughout this book and the previous one; it'd be awesome to actually read it though.
There was also a sense of nostalgia about Shadow Wave, not only James feeling it because he'd be leaving campus soon but for the reader as well. James was around twelve-years-old when the series started so it feels like we've watched him grow up throughout the books. I liked how the author finished off the book (and the series). It was just the right amount of happy cheesiness without going overboard.
A great story and a great ending to an awesome series. I can't wait for Muchamore's next series and of course the next of the Henderson's Boys books!
Posted by Tasha at 15:26