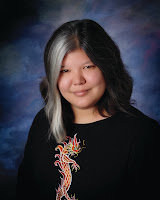 I'm excited to welcome Julie Kagawa, author of the Iron Fey series, to A Trillian Books! The Iron King

, the first of the series has recently been released in the UK.

Meghan Chase has never fit in at her small-town high school, and now, on the eve of her 16th birthday, she discovers why. When her half brother is kidnapped, Meghan is drawn into a fantastical world she never imagined--the world of Faery, where anything you see may try to eat you, and Meghan is the daughter of the summer faery king. Now she will journey into the depths of Faery to face an unknown enemy . . . and beg the help of a winter prince who might as soon kill her as let her touch his icy heart. The Iron King is the first book in the Iron Fey series.

Can you tell us a little about the main characters in the book?

Meghan Chase is the main character of The Iron King. She is a normal, slightly awkward sixteen-year old who finds herself dropped into extraordinary circumstances.

Do you have a favourite character? If so, who is it?

My favourite character would have to be Ash, because I have a thing for dark, brooding bad boys who can wield pointy weapons. But Grimalkin runs a very, very close second.

The covers of the books are amazing! How much say in them did you have?

They are gorgeous! Though I had very little say in them beyond “ooh, pretty!” It’s the awesome people at Harlequin TEEN that get all the credit, though I think they might be in league with the cover faeries.

What are you writing at the moment?

Right now, I’m working on a new YA series set in a post-apocalyptic world. With vampires!

Who's your favourite author?

Too many to count, but I do love Neil Gaiman.

A big, big thank you to Julie for taking part in the interview. You can read my reviews of the Iron Fey Series at the following links:

The Iron King
The Iron Daughter
The Iron Queen
Posted by Tasha at 00:02