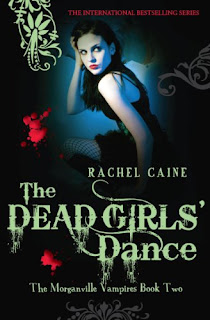 Claire Danvers has had her share of challenges - like being a genius in a school that favours beauty over brains, dealing with the homicidal girls in her dorm and, above all, finding out that her college town is overrun with blood-sucking fiends. On the plus side, so far Claire and her friends have managed to survive getting on the wrong side of some Morganville VIPs...Vampire Important Persons. But their temporary peace is in danger of collapsing, thanks to the arrival of her new boyfriend's scary father and his vampire-fighting supporters.

*Possible spoilers for the previous book in the series*

The second in the Morganville Vampires series, The Dead Girls' Dance follows straight on from where Glass Houses. Michael is dead and Shane's dad, Frank, has turned up with his biker gang, itching to kill some vampires. Killing vamps in Morganville is not a good idea. The story follows the conflict between Frank and the vampire community, with Shane getting caught up in the middle of everything and Claire and Eve doing everything they can to ensure their house mate's safety.

While I really enjoyed the first book of this series, I found this one even better as there was more excitement, drama and action - where as Glass Houses had to spend a fair amount of time introducing the characters and how the town works and everything. The characters continue to develop nicely, with Claire becoming more confident and mature throughout.

One of the things I really like about this series is the vampires. There's no mushy don't-feed-on-blood nonsense going on or anything like that. They're proper vampires; they burn in the sunlight (although the really old ones can build up some kind of immunity), they like power and will happily kill. I also like that the boundaries between good and bad blur a fair amount. There's vamps with good intentions and there's humans who are just as bad as the vamps. It's really well done.

The romance is dealt with fantastically. Obviously it wouldn't be a YA Urban Fantasy book without some but it's not the whole plot. It doesn't take over and it's not all angsty - although not without its difficulties. Claire doesn't fall madly in love with Shane at first sight. They get to know each other and then realise they like each other. I thought the sex issue was dealt with really well, finding a good compromise between the Claire being to innocent to even think of it and all out pouncing on each other. It added another dimension to their relationship.

I'm now really looking forward to reading the next book, and the rest of the series. A recommended read for those who want more realistic vampires and slightly more mature main characters (Claire's the youngest at 16, the others are 18/19). More True Blood that Twilight.