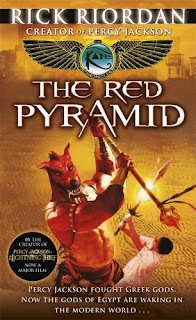 Since his mother's death six years ago, Carter Kane has been living out of a suitcase, traveling the globe with his father, the brilliant Egyptologist Dr. Julius Kane. But while Carter's been homeschooled, his younger sister, Sadie, has been living with their grandparents in London. Sadie has just what Carter wants -- school friends and a chance at a "normal" life. But Carter has just what Sadie longs for -- time with their father. After six years of living apart, the siblings have almost nothing in common. Until now.

On Christmas Eve, Sadie and Carter are reunited when their father brings them to the British Museum, with a promise that he's going to "make things right." But all does not go according to plan ; Carter and Sadie watch as Julius summons a mysterious figure, who quickly banishes their father and causes a fiery explosion.

Soon Carter and Sadie discover that the gods of Ancient Egypt are waking, and the worst of them --Set-- has a frightening scheme. To save their father, they must embark on a dangerous journey -- a quest that brings them ever closer to the truth about their family and its links to the House of Life, a secret order that has existed since the time of the pharaohs.

.  The tale is narrated by the two main characters, Sadie and Carter Kane, generally in chunks of two chapters and although on occasion I forgot who's turn it was, it was easy enough to remember as each page is marked with who's talking. I really liked both characters and the idea of them hardly knowing each other but having a natural sibling bond allows the reader to get to know them throughout the book as they reconnect with each other.

The story itself follows a similar style to the Percy Jackson books, with Sadie and Carter having a set time in which to reach their destination and complete their task, along the way running into various Gods, creatures and magicians who are trying to stop them. The main difference I found was that while I have a basic knowledge of Greek mythology (and so was able to second guess some of the Percy Jackson plots), I had no prior knowledge about Egyptian mythology before reading The Red Pyramid. It was fun to learn about it as I read the book as it made the story more than just an adventure. I have to admit I got a little confused with some of it at times, although I don't believe that was anything to do with the author or the writing. I think Egyptian mythology just is confusing - even the characters were confused at points!
The Red Pyramid is an exciting adventure story, combined with a fun way to find out about the Egyptians. a recommended read, especially if you're looking for a book for reluctant boy readers.
www.rickriordan.com
Posted by Tasha at 01:03