In My Mailbox is a weekly event exploring the books received this week and is hosted by Kristi @ The Story Siren. 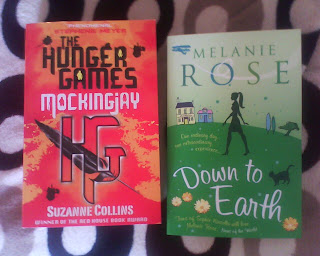 Katniss Everdeen, girl on fire, has survived, even though her home has been destroyed. Gale has escaped. Katniss's family is safe. Peeta has been captured by the Capitol. District 13 really does exist. There are rebels. There are new leaders. A revolution is unfolding.

It is by design that Katniss was rescued from the arena in the cruel and haunting Quarter Quell, and it is by design that she has long been part of the revolution without knowing it. District 13 has come out of the shadows and is plotting to overthrow the Capitol. Everyone, it seems, has had a hand in the carefully laid plans -- except Katniss.

The success of the rebellion hinges on Katniss's willingness to be a pawn, to accept responsibility for countless lives, and to change the course of the future of Panem. To do this, she must put aside her feelings of anger and distrust. She must become the rebels' Mockingjay -- no matter what the personal cost.

For Review
Down To Earth - Melanie Rose

When Michaela Anderson signs up for a parachute jump she gets more than a case of vertigo… Suffering last-minute panic, Michaela’s three colleagues go first. But just as she takes her leap of faith, an almighty gale blows up from nowhere. When she returns to the ground, she finds the airfield deserted, her car gone and the seasons mysteriously changed. Posters nearby proclaim Michaela to have been missing for the last six and a half years… But Michaela is determined to find out the truth. Was she kidnapped? Is she now suffering amnesia, or has something even more extraordinary occurred? With the help of handsome pilot Matt, Michaela sets out to find the truth. And what she discovers rocks everything she has ever believed in to the core… A magical tale that will enchant and enthral fans of Cecelia Ahern and Sophie Kinsella.