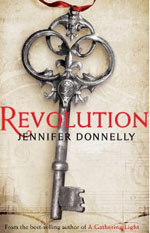 BROOKLYN: Andi Alpers is on the edge. She’s angry at her father for leaving, angry at her mother for not being able to cope, and heartbroken by the loss of her younger brother, Truman. Rage and grief are destroying her. And she’s about to be expelled from Brooklyn Heights’ most prestigious private school when her father intervenes. Now Andi must accompany him to Paris for winter break.

PARIS: Alexandrine Paradis lived over two centuries ago. She dreamed of making her mark on the Paris stage, but a fateful encounter with a doomed prince of France cast her in a tragic role she didn’t want—and couldn’t escape.

Two girls, two centuries apart. One never knowing the other. But when Andi finds Alexandrine’s diary, she recognizes something in her words and is moved to the point of obsession. There’s comfort and distraction for Andi in the journal’s antique pages—until, on a midnight journey through the catacombs of Paris, Alexandrine’s words transcend paper and time, and the past becomes suddenly, terrifyingly present.

Before reading Revolution, I wasn't too sure about whether I was going to like it. It's not the kind of thing I would usually pick but it did sound like an interesting story. I started the book late one night, planning to just read a chapter to give me a taste of it before heading off to bed. Eight chapters later I was still reading, engrossed in the story.

At the beginning of the book, Andi's story is one seen often in YA books - a teenage girl dealing with the death of someone close to her, in this case her younger brother. Trueman's death has deeply effected the family. Her parents have split up; her father remarried; her mother not coping at all well, spending most of her time painting. Andi herself only gets through each day with the help of medication and her music. She's failing miserably at school and because of this her father decides to take her on his business trip to Paris.There she finds a diary. The diary takes us back to the French Revolution and the life of Alexandrine and from this point the book switches back and forth between the two stories.

Donnelly's writing is amazing, with so much detail that I really felt like I was right there in Paris with both of the girls. The amount of historical detail and musical knowledge included is pretty awesome and I'm sure extremely well researched. The characters themselves were brilliant as well and I felt really invested in them, caring what happened to each and every one of them.

A highly recommended read for lovers of both Historical and Young Adult fiction.

Other Reviews of this book:
The Introverted Reader
Daisy Chain Book Reviews
Posted by Tasha at 10:14