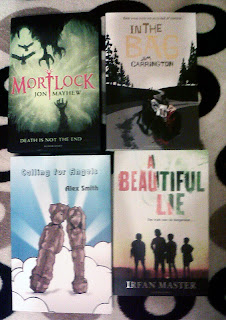 Joe and Ash are best friends. Ash is the leader, Joe the one who follows. Then one night after a party, Joe and Ash come across a holdall, seemingly abandoned by the side of the road. They open it up . . . and find £20,000 in cash. Of course they’re going to hand it straight to the police. Aren’t they? Or is all that money just too tempting? And that is precisely when the trouble starts . . .

An extraordinarily rich debut novel, set in India in 1947 at the time of Partition. Although the backdrop is this key event in Indian history, the novel is even more far-reaching, touching on the importance of tolerance, love and family.

The main character is Bilal, a boy determined to protect his dying father from the news of Partition – news that he knows will break his father's heart. With great spirit and determination, and with the help of his good friends, Bilal persuades others to collude with him in this deception, even printing false pages of the local newspaper to hide the ravages of unrest from his father. All that Bilal wants is for his father to die in peace. But that means Bilal has a very complicated relationship with the truth...

The sister is a knife thrower in a magician’s stage act, the brother is an undertaker’s assistant. Neither orphan knows of the other’s existence. Until, that is, three terrible Aunts descend on the girl’s house and imprison her guardian, the Great Cardamom. His dying act is to pass the girl a note with clues to the secret he has carried to his grave. Cardamom was one of three explorers on an expedition to locate the legendary Amarant, a plant with power over life and death. Now, pursued by flesh-eating crow-like ghuls, brother and sister must decode the message and save themselves from its sinister legacy.

Em - shy, sensitive, with her head in the clouds - and Caitlyn - gorgeous, popular and talented

- have been best friends forever, in a sleepy, nondescript town called Philiton.

But when new boy Zak moves into town, Philiton suddenly becomes a much more interesting place. With his meltingly hot looks, sense of humour and a smile that has even the hardest-hearted girls falling at his feet, Zak has the female population of Philiton Comprehensive School convinced he's an angel.