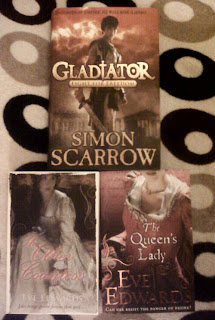 It's Rome, 61 BC. Recruited as a gladiator, young Marcus Cornelius Primus faces a new life of brutal training, governed by strict rules, as he learns the skills of an elite warrior. But Marcus cannot simply forget his past. His father lies murdered by soldiers and his mother has been kidnapped and forced into slavery. Marcus is determined to find his father's old commander, Pompeius the Great, to seek justice for his family and set his mother free. Yet, unbeknown to him, Marcus is hiding a life-threatening secret. And if the Romans discover it, there will be no escape...

It's 1582 and eighteen-year-old Will Lacey's family is in trouble. After years of wasteful spending, his late father has run Lacey Hall to near ruin. Tasked with marrying his family back into fortune, the new Earl of Dorset is all set for a season at court to woo not just the Queen but potential brides with his jousting skills. But when Ellie – a strong-willed girl with nothing to her name but a worthless Spanish title – catches Will's eye, he faces a bigger battle than he could ever have anticipated.

1584 – Surrey, England When Lady Jane Rievaulx begins service to the Queen at Richmond Palace, she is thrilled at the court’s newest arrival . . . Master James Lacey. Despite her previous courtship with his older brother, James is the man she truly loves. And for his part, he cannot deny his fascination with her. However, James is setting sail on a treacherous journey to the Americas, seeking absolution for what he sees as past sins. But when Lady Jane is forced into a terrible situation by her own family, there is only one man to save her. Will Master James return to his lady ­- before it’s too late?