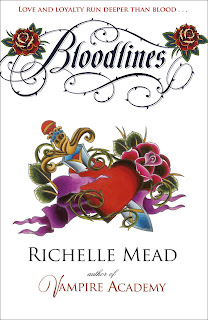 The hotly-anticipated brand new series that
Vampire Academy fans have been waiting for!!

Sydney protects vampire secrets – and human lives. As an alchemist, she is part of
a secret group who dabbles in magic and serves to bridge the world of humans and
vampires.

But when Sydney is torn from her bed in the middle of the night, she fears she’s still
being punished for her complicated alliance with dhampir Rose Hathaway. What
unfolds is far worse. Jill Dragomir—the sister of Moroi Queen Lissa Dragomir—is in
mortal danger, and goes into hiding. Now Sydney must act as Jill’s protector.

The last thing Sydney wants is to be accused of sympathising with vampires. And
now she has to live with one . . .

Now I haven't read the Vampire Academy books yet, it's one of those series' I keep meaning to start but haven't yet got to. However, this book looks awesome! I really like the kind of tattoo styling of the cover and that it's not really like all the other teen paranormal books out there.
Posted by Tasha at 22:19