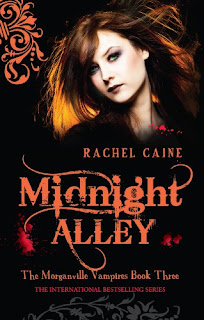 MORGANVILLE IS SUCH A NICE PLACE TO LIVE… AND DIE. IF YOU DON’T MIND THAT SORT OF THING.

When Claire Danvers learnt that her college town was run by vampires, she did what any intelligent, self-preserving student would do: she applied for a transfer and stocked up on garlic. The transfer is no longer an option, but that garlic may come in handy. Now Claire has pledged herself to Amelie, the most powerful vampire in town. The protection her contract secures does little to reassure her friends. All of a sudden, people are turning up dead, a stalker resurfaces from Claire’s past, and an ancient bloodsucker extends a chilling invitation for private lessons in his secluded home.

*Possible spoilers for the previous book in the series*


There's a whole lot of tension and secrets in the Glass house. As well as all the usual drama of living in Morganville, Shane's dealing badly with Michael being a vampire and Claire hasn't told any of the other housemates about her deal with Amelie. Part of this deal has Claire studying Alchemy with Myrnin, a less than mentally stable vampire. If that wasn't enough, Eve's brother is out of jail and causing all kinds of trouble.

The characters in this series are developing nicely as the books go on and we get to know more about them. Claire's becoming more worldly wise and becoming more a part of the group rather than the little kid the others look after. She's taken a big step by making her deal with Amelie which gives her and her friends some kind of protection in the town but now she's having to pay the price for that. Shane's pulling off moody bad boy as good as any one and I really love the relationship between him and Claire which show off his soft side. Some of the Shane and Claire moments throughout the book are unbelievably cute!

I really liked that we're starting to find out more about the vampires as well. Myrnin is a particularly interesting character and it's through him that we learn some more about what's going on with the vamps. I'm sure there's still a lot more to be revealed, particularly when it comes to Amelie.

Midnight Alley is as fast-paced and exciting as the previous two books and one thing I particularly like about the series is that there isn't a real set pattern to each book like some series' can have, which makes it that you never really know what's going to happen next and Caine quite often throws a curve ball that you don't see coming until it hits you. Plus there's the cliffhanger ending that I both love and hate!

Morganville Vampires is one of my favourite book series' but I must point out that these aren't stand-alone books in any way. Each book picks up directly from where the last one ended and there's minimal recapping of what's already happened - there's enough to remind you but I don't think it would be easy to know what's going on without having read the previous books. So, if you haven't already read the previous books ... do it now!