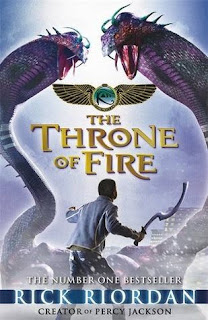 Title: The Throne of Fire

EVER since the gods of Ancient Egypt were unleashed on the modern world, Carter Kane and his sister, Sadie, have been in big trouble. As descendants of the magical House of Life, they command certain powers. But now a terrifying enemy – Apophis, the giant snake of chaos – is rising. If Carter and Sadie don’t destroy him, the world will end in five days’ time. And in order to battle the forces of chaos, they must revive the sun god Ra – a feat no magician has ever achieved. Because first they must search the world for the three sections of the Book of Ra, then they have to learn how to chant its spells . . . Can the Kanes destroy Apophis before he swallows the sun and plunges the earth into darkness . . . forever?

*Possible spoilers for the first book in the series*

The second of the Kane Chronicles series continues to follow Sadie and Carter on their Egyptian adventure. The siblings are on a mission to revive the sun god, Ra, in hope that if they succeed, it will prevent Apophis rising. Still coming to terms with their own powers, Carter and Sadie are now also training other new magicians as well as trying to locate three parts of the book of Ra.

As ever, Riordan's writing is fast paced and full of action and mythology. It continues the story from the first book with just enough recapping to remind you what's already happened, without overkill. Although I really enjoyed this book, I did have a couple of issues with it, mainly that the books aren't Percy Jackson. Okay obvious I know but bare with me. Firstly, I found I didn't engage with the Egyptian mythology as much as I did with the Greek in the PJ series. This is probably down to not knowing a lot about the Egyptians. I just found I enjoyed reading about the Greek gods as I generally knew their stories. In the Kane Chronicles, I find I wanted Google with me all of the time so I can find out more. The second thing was that I didn't connect with Sadie and Carter as much as I did Percy - possibly it was just the duel narrative meant we get to know the two of them less. However, saying that, I liked that the story was told from both points of view and that the two of them went off and did things separately.

All in all, a great read, with the only slight downside being that I couldn't help but compare to Percy Jackson which I personally preferred.

The Red Pyramid (my review)