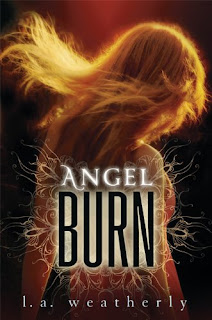 
Willow knows she’s different from other girls, and not just because she loves tinkering with cars. Willow has a gift. She can look into the future and know people’s dreams and hopes, their sorrows and regrets, just by touching them. She has no idea where this power comes from. But the assassin, Alex, does. Gorgeous, mysterious Alex knows more about Willow than Willow herself does. He knows that her powers link to dark and dangerous forces, and that he's one of the few humans left who can fight them. When Alex finds himself falling in love with his sworn enemy, he discovers that nothing is as it seems, least of all good and evil. In the first book in an action-packed romantic trilogy, L. A. Weatherly sends readers on a thrill ride of a road trip — and depicts the human race at the brink of a future as catastrophic as it is deceptively beautiful.

Alex hunts and kills angels. Because in this world, angels are bad. They feed off humans, leaving them with some kind of physical or mental illness. Alex is one of the few people left who can do something about stopping them. Willow has the ability to see into the future. She doesn't know why she can do this ... but Alex does.

There's something about angels that catches my interest, although I've yet to find an angel book I really like (I think I want them all to be like Castiel from Supernatural). I had mixed feelings about this book. I liked the plot of the story and that the angels weren't all perfect and good. The book follows both Willow and Alex, who are likeable enough, so we get to see what's happening to both of them when they aren't together and get another dimension to the story. It's also well written. However, there was something that didn't quite do it for me and I'm not even sure what. There did seem to be parts of the book where it seemed to drag and towards the end I was just wanting to get through it; it was almost like if it had been a hundred pages shorter, I'd have really liked it. It also felt a little like, while it was an unusual idea for a plot, it followed the same basic outline as a lot of YA books. Girl meets boy, situation leads them to falling for each other (I'm not counting this as a spoiler as it's really obvious it's going to happen), situation tears them apart ... you've read it a billion times before. I wanted some bigger twists in the tale, ones that I couldn't see from a mile off.

Overall, not a bad book and I'm sure I'll read the rest of the series to find out what happens. For me though, it just needed a bit more 'umph'.
Posted by Tasha at 09:50