Review: Across the Universe - Beth Revis 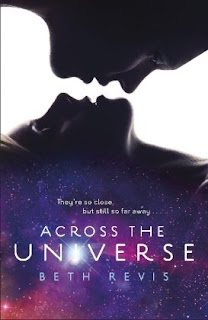 Title: Across the Universe

Seventeen-year-old Amy joins her parents as frozen cargo aboard the vast spaceship Godspeed and expects to awaken on a new planet, three hundred years in the future. Never could she have known that her frozen slumber would come to an end fifty years too soon and that she would be thrust into the brave new world of a spaceship that lives by its own rules.

Amy quickly realizes that her awakening was no mere computer malfunction. Someone-one of the few thousand inhabitants of the spaceship-tried to kill her. And if Amy doesn't do something soon, her parents will be next.

Now Amy must race to unlock Godspeed's hidden secrets. But out of her list of murder suspects, there's only one who matters: Elder, the future leader of the ship and the love she could never have seen coming.

Having been cryogenically frozen, seventeen-year-old Amy is suddenly and painfully woken. She'd expected to wake on another planet, three hundred years in her future but instead it's fifty years too early and she's still on the space ship, Godspeed.

Elder is the future leader of Godspeed and is trying to learn everything he can to be ready for this role. His teacher and the current leader, Eldest, isn't as helpful with this as he should be. Elder knows there's things Eldest isn't telling him and his determined to find out what. Even more so when it becomes clear that Amy's early unfreezing was an attempted murder and the murderer isn't giving up easily.

I wasn't really sure what I was going to think of Across the Universe when I started reading it. I'd seen both hype and bad reviews - and as I often find myself not liking hyped books, I didn't really have high expectations. However, I'm glad to say I was wrong and that I really enjoyed reading this book. I did find it a little slow to start and I wasn't all that taken by it for maybe the first quarter or so, but that could have been because I was almost looking for reasons to not like it. But then I found myself caring about the two main characters Elder and Amy and it was interesting to find out how the people on Godspeed lived.

For me there was two small disappointments. The first being that in parts of the story some of the emotion was lost by the point of view it was written from. The book switches between Amy and Elder but there were a couple of occasions when something happened to one of them but the story was being told by the other so the reader only got the more detached view rather than the emotions of the one dealing with it. The second disappointment was the 'twist', or at least I assume it was supposed to be a twist; I'd figured it out quite early in the book. Maybe it was supposed to have been obvious but I'd have liked it to be more of a surprise.

Over all, Across the Universe is a good read with some really likeable characters and an interesting story world. I'm looking forward to the next installment, A Million Suns, due to be released in 2012.
Posted by Tasha at 22:41