Review: Percy Jackson and the Battle of the Labyrinth - Rick Riordan 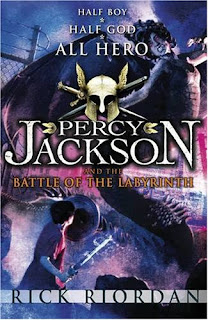 Title: Percy Jackson and the Battle of the Labyrinth

Percy Jackson's fourth summer at Camp Half-Blood is much like his previous three—high-octane clashes with dark forces, laced with hip humor and drama. Opening with a line for the ages—The last thing I wanted to do on my summer break was blow up another school—this penultimate series installment finds Percy, Annabeth and the satyr Grover furiously working to prevent former camp counselor Luke from resurrecting the Titan lord Kronos, whose goal is to overthrow the gods. When the heroes learn that Luke can breach Camp Half-Blood's security through an exit from Daedalus's Labyrinth, they enter the maze in search of the inventor and a way to stop the invasion. Along the way they encounter a lifetime supply of nightmare-inducing, richly imagined monsters. Grover's own quest to find the lost god Pan, meanwhile, provides a subtle environmental message. Percy, nearly 15, has girl trouble, having become something of a chick magnet. One of Riordan's strengths is the wry interplay between the real and the surreal. When the heroes find Hephaestus, for instance, he's repairing a Toyota, wearing overalls with his name embroidered over the chest pocket. The wit, rousing swordplay and breakneck pace will once again keep kids hooked.

I've found that as the Percy Jackson books progress, I can identify a little more with Percy. Maybe this is just because by now, the fourth book, the reader feels like they know him more or maybe it's just because he's older. At fifteen, Percy now comes across more of a real Hero, rather than just a kid who's been lucky.

This book, as the title suggests, involves a quest into the Labyrinth to find it's inventor, Daedulus. As expected, Percy is accompanied by Annabeth and Grover, as well as his half-brother, Tyson. There's plenty of action throughout and like the previous books, a unique take on Greek Mythology both sticking to the original stories and at the same time, bringing them up to date.

Part of The Battle of the Labyrinth also feels like it's setting up for the fifth and final book of the series. Kronos, the Titan Lord, is about to rise and there's definitely more to happen with Nico, son of Hades. I'm looking forward to finding out what happens next.
Posted by Tasha at 18:40