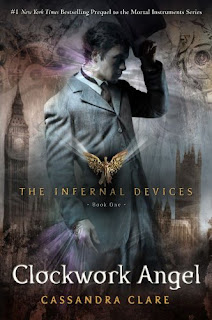 When sixteen-year-old Tessa Gray crosses the ocean to find her brother, her destination is England, the time is the reign of Queen Victoria, and something terrifying is waiting for her in London's Downworld, where vampires, warlocks and other supernatural folk stalk the gaslit streets. Only the Shadowhunters, warriors dedicated to ridding the world of demons, keep order amidst the chaos.

Kidnapped by the mysterious Dark Sisters, members of a secret organization called The Pandemonium Club, Tessa soon learns that she herself is a Downworlder with a rare ability: the power to transform, at will, into another person. What's more, the Magister, the shadowy figure who runs the Club, will stop at nothing to claim Tessa's power for his own.

Friendless and hunted, Tessa takes refuge with the Shadowhunters of the London Institute, who swear to find her brother if she will use her power to help them. She soon finds herself fascinated by—and torn between—two best friends: Jem, whose fragile beauty hides a deadly secret, and blue-eyed Will, whose caustic wit and volatile moods keep everyone in his life at arm's length...everyone, that is, but Tessa.

As their search draws them deep into the heart of an arcane plot that threatens to destroy the Shadowhunters, Tessa realizes that she may need to choose between saving her brother and helping her new friends save the world...and that love may be the most dangerous magic of all.

Tessa Gray arrives in England expecting to be met by her brother, Nate. Instead she is taken by the Dark Sisters who hold her while they prepare her for the Magister. It is here that Tessa learns that she has the power to transform into other people.

Rescued by Will, Tessa is given refuge at the London Institute and in return for giving the Shadowhunters all the knowledge she has of the Dark Sisters and the Pandemonium Club which they belong to, the members of the Clave promise to help her find her brother.

Clockwork Angel is set in the same world as Clare's Mortal Instruments, only in England and during the Victorian era. It has many similarities with this book having an added Steampunk element to it which makes it that bit different. It wasn't overly steampunky though so it would be a good introduction to the genre for anyone who hasn't read any before.

For anyone who's read MIs, there are a lot characters who will seem familiar, some like Magnus Bane who appear in both and others because they are ancestors of the original characters. Most notably I found that Will resembled Jace in many ways, although for me that wasn't a bad thing as Jace is my favourite character in MIs. The saminess of this book with the other series is quite obvious and I guess, in many ways expected. Despite having finished the book, I'm still not sure if this is a good or bad thing. It would have been nice to have a little more difference to spice it up a little but at the same time, having loved the MIs I enjoyed reading more of the same.

One of the most enjoyable parts of this book for me was learning more about the Shadowhunters and the world they live in, seeing it from different view points and a different time. There's lots of action going on throughout the story, keeping the pace fast. Another great part of Clare's books is the witty dialogue. I particularly like how Will and Jem banter and argue with each other but it's in a completely brotherly way.

I think that technically the two series' could be read in either order but I personally I'd recommend reading Mortal Instruments first as there seemed to be less explanation of the world in Clockwork Angel - not a bad thing because it would have been annoying if everything had been repeated, but it may be confusing for anyone who chooses to read this first.
Posted by Tasha at 23:58