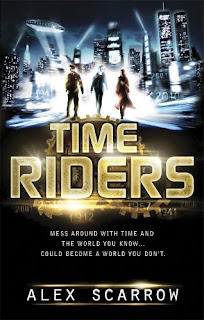 Liam O'Connor should have died at sea in 1912. Maddy Carter should have died on a plane in 2010. Sal Vikram should have died in a fire in 2029. Yet moments before death, someone mysteriously appeared and said, 'Take my hand ...' But Liam, Maddy and Sal aren't rescued. They are recruited by an agency that no one knows exists, with only one purpose - to fix broken history. Because time travel is here, and there are those who would go back in time and change the past. That's why the TimeRiders exist: to protect us. To stop time travel from destroying the world...

Liam, Maddy and Sal were all about to die when a time traveller, Foster, plucks them from their time and brings them to New York, 2001. The three of them are about to become a team of Timeriders, with the task of making sure no one else messes up the time lines. Their job is to spot when something has changed, figure out what and when it happened and go then fix it.

Wow! This book turned out to be much more awesome than I expected it to be. Yes the concept sounded good even before reading but it was executed to perfection.Timeriders has adventure, action, science, history and dystopia all in one fab story.

Being the first book of the series, there's a fair bit of setting the scene, introducing the characters and so on. This it's self is interesting enough as we learn all about the role of a Timerider along side the characters themselves. The story jumps about a bit from different times and we get to see what the 'baddies' are up to throughout. The story is based around World War II and what could have happened if one important part of the war was changed.

I really liked all of the main characters and felt involved with them, caring about what happened to each of them. They were well developed and each had their own personality and role within the group. Maddy is to be the leader of the team. She's the sensible one and the computer geek. Maddy's the only one who's lived through 2001 already and so her new world isn't that much different to the one she's used to. Sal is the youngest, vulnerable and a bit naive. For her 2001 is in the past, before she was born and so everything's a bit old fashioned and out of date to her. Liam is the only one for whom 2001 is in the future. He has no idea about anything technological and is completely out of his comfort zone. Liam's the action guy, he's the one travelling through time while the others guide him from their base. Liam's not alone though. He has Bob for company and information. Bob is possibly the best character of the lot! He's kind of like a meat robot. He appears human (if a little on the large side). He's still learning to act human though. Last of all is Foster. He's the experienced Timerider, the one who's been doing the job already. Now his task is to teach and prepare the new team as best he can.

I'm really looking forward to getting stuck into the rest of the series. The second book has dinosaurs and I'm especially excited about the third one as it has Robin Hood!

Check out the Timeriders website where you can see awesome photos, read Maddy's blog and other cool stuff.