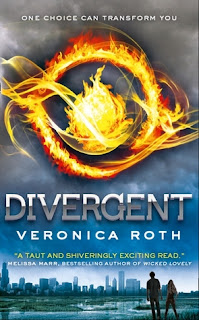 In Beatrice Prior's dystopian Chicago, society is divided into five factions, each dedicated to the cultivation of a particular virtue—Candor (the honest), Abnegation (the selfless), Dauntless (the brave), Amity (the peaceful), and Erudite (the intelligent). On an appointed day of every year, all sixteen-year-olds must select the faction to which they will devote the rest of their lives. For Beatrice, the decision is between staying with her family and being who she really is—she can't have both. So she makes a choice that surprises everyone, including herself.

Sixteen-year-old Beatrice Prior has a decision to make: should she stay in the faction she grew up in, where she can stay with her family and everything she knows, or should she accept that she's not selfless enough to be Abnegation and move to another faction, where she will no longer see her family but can live more like her true self. Needless to say, Beatrice opts to move to a new faction (otherwise there wouldn't be much of a story). She changes her name to Tris and tries to settle in as a Dauntless initiate. She has new friends and a new way of life but as in any dystopian story, things aren't quite what they seem.

Divergent is an amazing story, set in a brilliantly crafted world. The plot is full of action, emotion and excitement with fantastically developed characters. Tris is a tough cookie but there's an edge of vulnerability to her as well which makes things interesting. She'll stand up for what she believes in but she also feels scared and alone at times. There's some good secondary characters as well, some nice, some not so much and for a lot of the book, we're not really sure about some of them. The Dauntless initiates spend a lot of time in competition with each other so at any point it feels like even Tris's new friends could turn on her. As with most books of this kind, there's the love interest. Four is a mysterious character. It's clear there's a whole lot of Four's background hidden (even his real name isn't revealed until late in the book) and the author does an excellent job throughout the book of giving just enough away to make you want to know more.

For me, this book was right up there with The Hunger Games and I'm hoping that the rest of the series (a trilogy I believe) will be just as good. Do not miss this book.
Posted by Tasha at 22:53