are both out now. 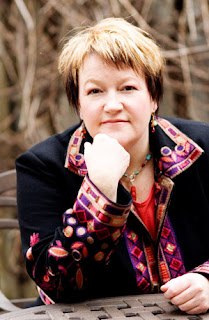 First of all, can you tell us something about you, both as a person and as an author?

I'm someone who took a long time to go after my dreams of writing, or even admit that I had them. I don't regret pursuing my first career--it made me who I am, gave me some financial security, let me travel around the world--but with writing, I feel that I've finally found what I was meant to be doing.

There has been a number of books recently that added a twist to classic books, such as Pride, Prejudice and Zombies. What inspired you to re-write classic fairy tales in this manner?

An editor approached me with the idea of doing fairy tales with a choose-your-own-adventure element, and I didn't have much time to develop the concepts for the book proposals we initially took to the publisher. As best as I can tell, the ideas came to me in a bolt of lightning.The title Sleeping Beauty: Vampire Slayer literally hit me, and then the ideas for both books developed from there.

My only outward objective in writing these stories was to create adaptations of the classic tales which were much more adventurous and fast-paced, and in which the heroines were strong and capable of saving themselves. I also wanted to "fix" some of the elements that bothered me in the originals. For example, the classic Cinderella character was too much of a victim for my taste, waiting around for a handsome prince to save her. I also never liked the idea that the prince needed a shoe to recognize her the day after supposedly falling in love.

The books follow a "chose your own adventure" format. What made you decide to use this for these books?

That part wasn't my idea, but I thought it would be a lot of fun. Little did I know how much of a challenge it would also be! I made a decision early on that, since the stories were fairy tales, they needed traditional happy endings, and pretty specific happy endings--that is, Cinderella ending up with the Prince. With hindsight, it would have been fun (and easier) to have alternate paths which diverged into "wrong paths" and alternate endings, but that's not what I chose to do.

The way I see things, every day we face choices and the alternatives aren’t necessarily right or wrong—just different. Smart heroines (and smart readers) will make smart choices, so I wanted to present reasonable alternatives at each decision point without making it obvious which choice was better. Also, a capable heroine—even if she makes a mistake—should be able to face whatever challenges her choices place in her path.

How did you go about writing the different sections? Did you write one story right through and then the alternatives or did you write each option before going onto the next part?

I had to do a lot of plotting and outlining for these stories. Because of the structure--everything looping around to a single, traditional, fairy tale happy ending--it was kind of like putting a puzzle together. I worked on Cinderella: Ninja Warrior first, and I wrote the alternatives as I went. For Sleeping Beauty: Vampire Slayer, I took the opposite approach and wrote one story straight through, then wrote the alternatives. To be honest, I'm not certain which was easier. Both methods had their challenges.

How did you decide that Sleeping Beauty would be a Vampire Slayer and Cinderella a Ninja Warrior? Were there any other options for them, say, Zombie Hunter?

When the editor first asked if I'd be interested in writing fairly tale adaptations, starting with Cinderella, I asked how much creative freedom I'd have. She insisted I'd have complete freedom, and to test that assertion I asked, jokingly, "Can there be ninjas?" I honestly was joking--mostly. Then suddenly I had a vision of ninjas dropping out of trees to attack Cinderella and I decided to make what was initially a joke into a real story concept.

With Sleeping Beauty: Vampire Slayer, the title came first. As soon as it struck, I loved the idea of combining Sleeping Beauty with vampires. There's a certain amount of darkness in the traditional story and I always found the idea of a girl asleep, with suitors trying to wake her, more creepy than romantic. We're so vulnerable asleep. That led to thoughts of how else a girl could be vulnerable in the dark and then the idea of isolating her from her friends and family--making her the only one alone in the night with the vampires.

I didn't consider any other options for these two fairy tales (although some alternate titles were considered for Cinderella--ones more to do with magic). However, I do have a list of other adapted fairy tale titles tucked away for future Twisted Tales.

Are you planning to write more Twisted Tales? If so, can you share what stories we are likely to see?

I hope there will be, although there are no firm plans, yet, nor can I share specific ideas. I was, however, disappointed when the movie How to Train Your Dragon was released. (I hadn't heard of, or read the book.) It kind of killed my Snow White: Dragon Tamer idea. Although, maybe not...

Which fairy tale character was your favourite as a child?

I'm not sure I had a favourite fairy tale as a child. I was a real fraidy-cat and by the time I'd grown out of my intense fear for witches, I think I'd also grown out of fairy tales, or rather was already "annoyed" by the fact the heroines were so passive. Now, if there'd been fairy tales like some of the adaptations available today--that would have been different!! I'm not sure I'll ever grow out of those.

Do you have a favourite place where you write?

I like writing in coffee shops. The Twisted Tales were written in Broadview Espresso, Merchants of Green Coffee and the Timothy's at the Carrot Common. :)

Who are some of your favourite authors?

I read in a vast range of genres and have many favourites. Authors whose entire backlists I consumed as soon as I read the first include Robertson Davies, John Irving, Anne Rice, Anne Tyler, Alice Hoffman, and J.R. Ward. More recently I've become a huge fan of Carrie Ryan and I've definitely been inspired as a writer by Suzanne Collins. She gave me the courage to put young characters in grave danger.

Last question, do you have a book that you can keep going back to and reading over and over again?

You know, I don't. I do have comfort movies that I can watch over and over, but for me, the magic in a book is all in the first read. Ironically, I seem to be incapable of getting rid of old books. My entire house is full of books and I do fondle the covers and flip through old favourites, but rarely re-read them.

A big, big thank you to Maureen for taking part in the interview. You can read my review of the Twisted Tales books below.