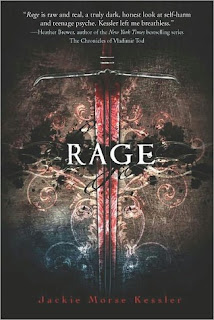 Missy didn’t mean to cut so deep. But after the party where she was humiliated in front of practically everyone in school, who could blame her for wanting some comfort? Sure, most people don’t find comfort in the touch of a razor blade, but Missy always was . . . different.

That’s why she was chosen to become one of the Four Horsemen of the Apocalypse: War. Now Missy wields a new kind of blade—a big, brutal sword that can cut down anyone and anything in her path. But it’s with this weapon in her hand that Missy learns something that could help her triumph over her own pain: control.

A unique approach to the topic of self-mutilation,Rageis the story of a young woman who discovers her own power and refuses to be defeated by the world.

You can read my review of the first book in the series, Hunger, here.

Melissa Miller is a cutter, a self-harmer. She deals by bleeding out the bad. It makes her feel in control. After an incident involving her ex-boyfriend and public humiliation, Missy accidentally cuts too deep and finds herself face to face with Death - quite literally. Death offers her an option - to become one of the Horsemen of the Apocolypse: War.

Like in the first book of the series, Hunger, in which the protagonist is an anorexic who becomes Famine, Rage deals with an extremely sensitive issue in a fantastic way. The self-harming is in no way glamourised nor does it hold back on the details. It's not preachy either. It just tells it like it is. With no personal experience of self-harming (either first or second hand) I found this book to be an incredible insight and by the end of it felt like I had some understanding as to the feelings and emotions behind cutting.

At times this book can be very serious and dark but this is offset with humour, usually in the form of Missy's conversations with Death, who the author has portrayed as the laid back rockstar with a dry sense of humour. I really liked this characterisation and it certainly gave a few light moments in the book.

I'm looking forward to reading the next instalment of the Horsemen of the Apocolypse series, Loss, which is stars Pestilence. I'm interested to find out what issue this rider is dealing with and how the author handles it.
Posted by Tasha at 09:20