Review: The Hounds of Artemis (Dr Who) - James Goss 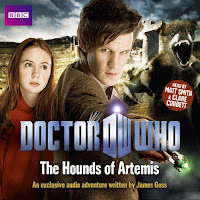 Title: The Hounds of Artemis

When Lord Woolcroft and his team break open the fabled Tomb of Artemis, sealed for thousands of years, they are astonished by what they find inside... The Doctor and Amy have come to Smyrna in 1929 to investigate a mystery. The Doctor knows something very bad happened there: something caused a lot of people to die and an entire, magnificent Temple to be found and then immediately lost again. But he doesn't know what is picking off the archaeologists one by one, or how it is connected to the terrifying howling in the night. And as he and Amy get closer to the terrible truth behind an ancient evil, he begins to wish he'd never found out.

A relatively short (at just over an hour) but exciting story, The Hounds of Artemis provides a great listen which would most certainly live up any boring car journey.

The Doctor and Amy are at the site of an archaeological dig in which the Tomb of Artemis is opened. As expected with a Dr Who adventure, the contents are the tomb aren't quite what was expected.

The audio book is duel narrated by both Clare Corbett and Matt Smith (the Eleventh Doctor). Personally I enjoyed listening to Matt's parts a little more as he brought a touch of the Doctor's franticness to the story but that's not to say the other bits weren't good as well.
Posted by Tasha at 23:15