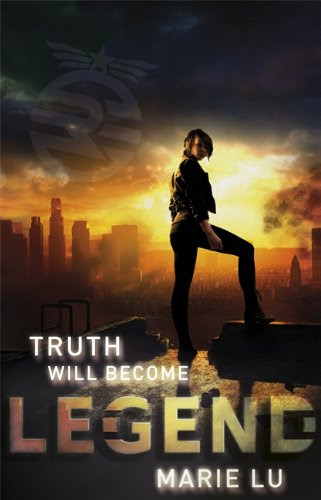 The United States is gone, along with its flooded coasts. North America's two warring nations, the western Republic and the eastern Colonies, have reached a breaking point. In the midst of this broken continent and dark new world are two teenagers who will go down in history....

Born into the slums of Los Angeles, fifteen-year old Day is the country's most wanted criminal. A mysterious boy with no recorded image or fingerprints. A boy who should no longer exist. A boy who watches over his family until one evening, when the plague patrols mark his family's door with an X--the sign of plague infection. A death sentence for any family too poor to afford the antidote. Desperate, Day has no choice; he must steal it.

Born to an elite family in Los Angeles' wealthy Ruby sector, fifteen-year old June is the Republic's most promising prodigy. A superintelligent girl destined for great things in the country's highest military circles. Obedient, passionate, and committed to her country--until the day her brother Metias is murdered while on patrol during a break-in at the plague hospital.

Only one person could be responsible.

And now it's June's mission to hunt him down.

Day is thought to be dead by his family, and the government. Instead he lives at large in the slums of Los Angeles, doing whatever he has to to survive ... and causing more than a little chaos along the way. He's the Republic's most wanted criminal, if only because they don't know who he is - there's no records or ID for him and he regularly changes his appearance to throw them off track.

June has had a privileged life. She lives in the rich part of town and thanks to her perfect score in the Trial she graduates from one of the top universities at a younger age than most even start there. Life isn't all great for June though, her parents died when she was young and she's been brought up by her older brother, Metias.

Day and June's destinies meet when Day breaks into the hospital for medicine for his younger brother. Metias is killed and June swears to seek revenge by hunting down Day.

Legend is the first book in what is sure to be a great series. Set in an intriguing world where the USA is divided into the Republic (west) and the Colonies (east), nations at war with each other for so long that the 'United States' as a concept is long forgotten, living on only as rumour. There is so much more I want to know about this story world and as such, I can't wait to read the rest of the series.

Duel narration from the two main characters, Day and June, provides clear insight into both of their personalities and with a combination of a hot, rebellious boy and a strong, intelligent girl, what more could a book need?Well, there's conflict, the obligatory 'bad guy', surprise twists, puzzles and an adorable side-kick in the form of Day's 'adopted' sister, Tess.

My only slight 'bad' point is that as the first book of a series set in a complicated world, it's a little heavy on the explanations at times. However, this is to be expected and even appreciated as it gives a clearer understanding of the setting. On occasion though, I was desperate to get back to the action.

A great start to a series that's surely going to be one of the top dystopians of 2012.
Posted by Tasha at 22:20