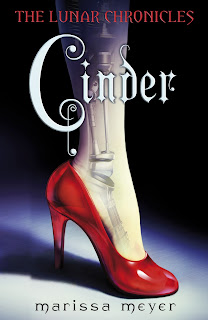 Humans and androids crowd the raucous streets of New Beijing. A deadly plague ravages the population. From space, a ruthless lunar people watch, waiting to make their move. No one knows that Earth’s fate hinges on one girl. . . .

Cinder, a gifted mechanic, is a cyborg. She’s a second-class citizen with a mysterious past, reviled by her stepmother and blamed for her stepsister’s illness. But when her life becomes intertwined with the handsome Prince Kai’s, she suddenly finds herself at the center of an intergalactic struggle, and a forbidden attraction. Caught between duty and freedom, loyalty and betrayal, she must uncover secrets about her past in order to protect her world’s future.

In this thrilling debut young adult novel, the first of a quartet, Marissa Meyer introduces readers to an unforgettable heroine and a masterfully crafted new world that’s enthralling.

Cinder lives in New Beijing, a future city over a hundred years after the Fourth World War. When she was eleven, Cinder received an operation following an accident which left her classed as a cyborg. She lives with her step-mother and step-sisters, earning her keep as a mechanic. Amidst a plague, thought to have originated from Luna, a moon colony, Cinder meets and gets to know Prince Kai, the future Emperor of the Commonwealth. Cinder longs to escape her life, to just be free to do as she pleases, but she is caught up with doing her bit against the plague and the impending war with Luna.

When I first heard of this book I was a bit, "Eh, another retelling" - until I found out more about it. The whole scifi take on the concept made me intrigued to read. The author has developed an exciting future world, using the base of the Cinderella story to come up with an interesting concept for a story.

Cinder was a really likeable character, with just the right balance of gutsy and determined combined with a few flaws to make her realistic. As expected, Prince Kai draws you in right from the moment he appears in the story. Cinder's step-mother is only outshone in nastiness by Queen Levana of Luna, creating a great cast of characters.

I thoroughly enjoyed reading this book, although, for me, it did have a few things that stopped it from being right up there with the best. One was that I felt like I wanted to know much more about the history and workings of the story world. As Cinder is part of a series, I'm hoping more of that will come in the later books.

As a re-telling of a classic fairy tale, it's probably to be expected that there needs to a be a big twist in the plot to keep the reader engaged and guessing what's going to happen. While there is a twist, I actually figured it out around page 40. Whether it it was really obvious, or whether that was just me, I can't say but I think I would have gotten much more out of the book if I'd been surprised by the reveal.

Still, Cinder is still a really good read and I'm looking forward to reading the rest of the series - especially as this one ended on a cliffhanger.

Don't forget to check out Marissa Meyers guest post: 10 Things You May Not Know About Cinderella
Posted by Tasha at 20:27