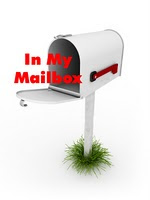 In My Mailbox is a weekly event exploring the books received this week and is hosted by Kristi @ The Story Siren. All excerpts from Goodreads unless stated.

Bought:
Supernatural: Rising Son
Set in the time before John Winchester's disappearance (and the beginning of the TV series), the demon hunter is crossing America with his two sons Dean and Sam, now aged 11 and 8, in a desperate quest to find out what happened to his missing wife. But is the life of a demon hunter truly the life John wants for his boys?

The Awakening & The Struggle (Vampire Diaries #1-2) - LJ Smith
Elena: the golden girl, the leader, the one who can have any boy she wants.
Stefan: brooding and mysterious, he seems to be the only one who can resist Elena, even as he struggles to protect her from the horrors that haunt his past.
Damon: sexy, dangerous, and driven by an urge for revenge against Stefan, the brother who betrayed him. Determined to have Elena, he'd kill to possess her.

The Fur & Dark Reunion (Vampire Diaries #3-4) - LJ Smith
Elena: transformed, the golden girl has become what she once feared and desired.
Stefan: tormented by losing Elena, he's determined to end his feud with Damon once and for all—whatever the cost. But slowly he begins to realize that his brother is not his only enemy.
Damon: at last, he possesses Elena. But will his thirst for revenge against Stefan poison his triumph? Or can they come together to face one final battle?
Chaos Bleeds - James A. Moore
Life on the Hellmouth -- a.k.a. Sunnydale, California -- has always involved a steady parade of demons intent on ruining Buffy Summers's nightlife. Staying at the top of her game means Buffy's racked up some powerful enemies.
Now an old nemesis has returned: Ethan Rayne, a college "friend" of Giles's, has arrived in Sunnydale, and this time he actually wants Buffy's help. Not surprisingly, he's run afoul of The First -- an ancient evil that predates humankind. And now The First has made Ethan a deal he can't refuse: ultimate power. All he has to do is lure Buffy into battle.
With their sanity on the line, the gang is going to need all the help they can get. Enter Spike and Faith...

My Invented Life - Lauren Bjorkman
With Roz and Eva everything becomes a contest—who can snag the best role in the school play, have the cutest boyfriend, pull off the craziest prank. Still, they’re as close as sisters can be. Until Eva deletes Roz from her life like so much junk e-mail for no reason that Roz understands. Now Eva hangs out with the annoyingly petite cheerleaders, and Roz fantasizes about slipping bovine growth hormone into their Gatorade.
Roz has a suspicion about Eva. In turn, Eva taunts Roz with a dare, which leads to an act of total insanity. Drama geeks clamor for attention, Shakespearean insults fly, and Roz steals the show in Lauren Bjorkman’s hilarious debut novel.
Posted by Tasha at 22:00