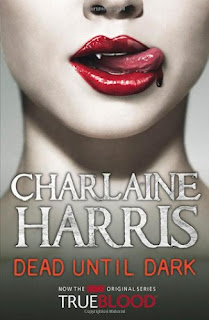 When a string of murders happen in Bon Temps, blame falls first on Bill (well, he is a vampire!) and then on Sookie's brother Jason. Sookie knows that neither of them is involved but the only way of proving it is to find the real culprit. It shouldn't be too hard because he's after her as well.

Usually when a movie is made from a book, I read the book first so it was a little strange doing it the other way around with Dead Until Dark (ok, TV series, not movie). The main reason I like to read the book first is so I can imagine the characters for myself. Naturally, while reading this I had the TV characters in my head all the way through - not necessarily a bad thing in the case of Jason and Eric though, hee!

I enjoyed reading Dead Until Dark, although I think I would have enjoyed it more had I not already watched the TV show (which I loved btw). This was largely down to two factors. The first being that I already knew what happened (ie. whodunnit) and secondly because I felt the TV characters were better developed - I'm guessing this was probably because the script writers would have used the other books in the series for their character development. The main characters I felt this applied to was Jason, Rene and Layfayette (seriously, he was mentioned like twice! And I love Layfayette!).

Personally I felt like the person responsible for the murders was a little too obvious in the book (although I guess I already knew who it was so that made it more so) - the TV show did a better job of making him seem like a nice guy. However, although the book series is called the "Southern Vampire Mysteries", I'm not sure the mystery part of the story is the main point of the book. It's really more about the relationships between the characters and how they are dealing with vampires coming "out of the coffin". The murders were more of a plot device for showing Sookie's telepathy and how vampires are being accepted (or not) into normal society.
I can't wait to read the rest of the series which I think I will enjoy even more with not knowing what happens!

Other reviews of this book
I'm a Lit-Bitch Baby
Posted by Tasha at 16:44