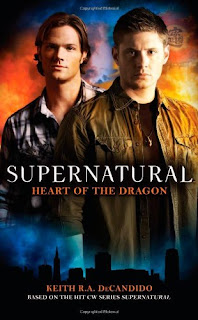 For this review I'm assuming knowledge of the TV shows - if you've not watched them, there may be spoilers to follow.

Forty years ago Samuel and Deanna Campbell along with their daughter, Mary, fought the Heart of the Dragon. They thought they'd defeated it but only banished it for twenty years. On it's return it was John Winchester's hunt. He too could only send it away for the same period of time. Now it's Sam and Dean's turn. Can they succeed where their parents and grandparents couldn't?

I was pleasantly surprised by this book. I absolutely love the TV series and I think I'd prepared myself for the book to not be so good, kind of like a defence mechanism so I wouldn't be too disappointed as I usually find the book to screen adaptations and vice versa are often a let down. Honestly, I don't think I would have been disappointed even if I'd been expecting great things from this book!

After a chapter at the start about how the Heart of the Dragon came to be, the book is essentially a three-part story, tied together by Sam and Dean's research into the past. The first part is about their grandparents and mother. It was interesting to read about this part of the brother's heritage as it's something that fans of the series don't know all that much about (as neither do the brothers). I'm not going to give too much of it away but I really enjoyed reading about fifteen-year-old Mary hunting with her parents.

The second part of the book is a little more familiar with John Winchester taking over the hunt. John knows that the Heart of the Dragon was banished by hunters twenty years previously, he just doesn't know that one of them was his wife. This part of the story is set around six years after Mary's death. John is still learning the ways of a hunter, mostly by trial and error and with a little help fro Bobby Singer. Sam and Dean make an appearance as a six and ten-year-old and as ever it's cute to see their relationship as kids. Dean's thoughts about his Dad provide some emotion as well.

The brother's take over the story in the last part of the book. This section is based part way through season five of the TV show, so although it's a stand-alone story in that, it's not necessary to read it for the series to make sense, I was glad to see how well it fitted in nicely with the overall plot. It links to the Apocolypse stuff going on in the show and all of the characters are written in keeping with what we see on TV. The only minor downside is that I couldn't see the pretty or the awesome facial expressions of the actors, lol!

When I started this book and first got to the Sam and Dean parts I did feel a little bit like I was reading fanfic, not because of the writing (which is actually really good) but I think just because it was TV characters in text form. I've always found it the same with the Buffy books. There was even a little part with Dean and Castiel which had me half expecting some slashiness. =D

Overall it was a really enjoyable read. I read it through pretty much in two reasonably long sessions over two days (and probably would've read it straight through in one sitting had I not needed to sleep!) so it really must have captured me. Itt really is only a book for fans of the TV series though as references are made to things without much explanation behind them. In fact, there's one that I'm still trying to figure out, lol!
Posted by Tasha at 13:00