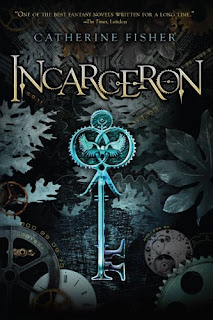 Finn lives inside Incarceron, a vast sealed prison. So vast it contains forests and cities. The prisoners are descendants of the original inmates. In centuries only one person has ever escaped.

Outside, the Warden's daughter, Claudia, feels trapped in her own world. A futuristic one where 'protocol' rules, time is stuck in the 17th century - at least on the surface - and an arranged marriage looms.

The adventure itself is essentially a tale of some of the prisoners of Incarceron trying to find their way out, helped along by contact with a couple of outsiders. Through this adventure we find out all about Incarceron, how it came to be and what it's like in there. While a lot of detail is given, I get the impression what is revealed in the book isn't the whole story though and that makes me want to read the second book, Sapphique

, even more.
There's so much detail and plot twists in this book that the pages just kept turning because I just had to find out what happened next. Even with a complex world and great plot, for me the thing that stood out the most in this book were the characters. They are well rounded and described in enough detail that you really feel like you know them. You can feel Claudia's desperation as she gets closer and closer to having to marry Caspar. There's a sense of sadness about Jared, her tutor, that's not really explained but feels right for him somehow. However, I did find that two of the characters stood out more than the others in catching my attention. Finn and Keiro.

Finn has no memory of his past up until a few years ago when he woke up in Incarceron but believes he's from Outside. He's the hero of the story in every way. He wants to find out where he came from but he's also the type of person who wants to do the right thing, help people as he goes about his quest and he trusts people. He's a nice guy but that doesn't mean he always does the right thing. Right at the start of the book he's involved in a robbery and he's certainly not beyond breaking the rules - as long as it's for the right reason. If he needs food, he'll steal some; if he's in trouble he'll attack.

While I really liked Finn, I really took to Keiro - his oathbrother - the most. Oathbrothers aren't natural brothers but are sworn to each other. They trust and protect each other at all times - although trusting Keiro isn't something most people would do. Finn believes in him though. I think I liked Keiro the most because he's got that arrogant, full of bravado, bad boy, bit of a rebel thing going on and I'm always drawn to that kind of character for some reason lol! He's got the unpredicability factor. He's not evil but he's not necessarily always going to do the right thing and that makes him more interesting. He's in the adventure for what he can get out of it rather than for the greater good. I loved that throughout the whole book there were numerous moments where you really don't know whether Keiro is going to betray Finn. You hope he won't but you can almost see him weighing up his options. I also loved the relationship the two of them have. They really are like brothers in every sense. They don't always agree and even come to blows on occasions but they always stick up for each other. Keiro especially seems to have the attitude that he can say what he likes to Finn but woe behold anyone else who tries it.

There's so much about this book that it would appeal to all kinds of readers. Even if you don't like the scifi/fantasy genre, it's worth reading just for the characters and the relationships they build with each other.
Posted by Tasha at 20:12