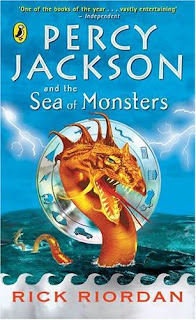 The Sea of Monsters (Percy Jackson and the Olympians, Book 2)

My review of the first book in the series, The Lightening Thief, can be found here

Percy has almost made it througha whole year of school without being kicked out. Too good to be true? Sure it is. A run in with some monsters soon sees to that and has Percy fleeing to Camp Half-Blood where things aren't exactly as they were last year.

Finding the Golden Fleece appears to be the answer to putting the camp back to how it should be and off course Percy's the one who gets to retrieve it, along with Annabeth, Clarrise and newcomer, Tyson. They also need to rescue Grover while they're at it. All in a days work for a half-blood.

The Percy Jackson books pretty simple in style - Percy has to find something and deal with a whole load of mythical stuff on the way. It's mostly obvious what's going to happen before it does but there's a few twists and turns as well as the explanations of the myths that keep the interest factor. They're funny and full of action which makes them enjoyable to read and Sea of Monsters doesn't disappoint in this.

The only thing I didn't like about this book was Tyson. He was a little annoying in my opinion but not in a he's supposed to be kind of way. The only way I can describe it is the "Hagrid factor". Most people who've read the Harry Potter books either love or hate Hagrid. Personally I'm one of the latter and Tyson was quite similar for me.

Other than that I enjoyed the book and really liked the end/set up for the next in the series
Posted by Tasha at 15:22